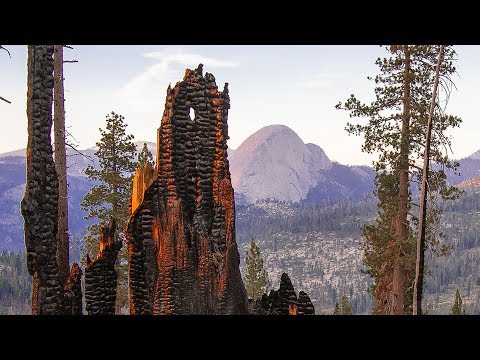 Restoring natural fire regimes to California's mountains could be a win-win-win: more water, improved biodiversity and a reduced risk of catastrophic fires The verdant meadows of Illilouette Creek drain directly into the southeastern corner of bustling Yosemite Valley via 370-foot Illilouette Falls. Springtime wildflower displays draw crowds from the popular lookout at Glacier Point, a short hike away.

The Illilouette Creek Basin also happens to be surrounded by a bowl of pure Yosemite granite, meaning its 40,000 acres are actually quite isolated in one important way: fire. When a blaze ignites by lightning, it’s not likely to escape. Typically firefighters don’t even bother.

In fact, despite its proximity to one of California’s largest tourist draws, the Illilouette Basin is one of two wilderness areas in the state where fire officials allow lightning-sparked fires to burn by default with careful monitoring. That makes it an ideal living laboratory for scientists like Sally Thompson, professor of environmental engineering, who has used it to study how the frequency of fire affects the movement of water through the landscape.

Thompson’s findings in the basin provide promising new evidence that the sort of natural fire regime seen in the Illilouette Basin since the current policy was enacted in 1972 can alter local hydrology in meaningful, largely beneficial ways — including sending more water downstream to end users.

Elsewhere in California, suppression is the name of the game: extinguish all flames at any cost. And while fire exclusion began to be widely practiced here in the late nineteenth century — with the overall goals of protecting lives and increasing timber output — it has of late been shown to have the opposite effect by building denser, duff-covered forests that eventually fuel massive, uncontrollable fires. Frequent, moderate-intensity burns in California forests don’t just reduce the risk of catastrophic fire. They also serve an ecological role by promoting biodiversity and the regeneration of fire-adapted native plants.

And, as Thompson’s findings in the Illilouette Basin over the past five years have shown, fire can also be a boon to both local ecosystems and water users far downstream — including humans — largely because fire-thinned forests consume less water and offer more space for meadows and wetlands.

“If you take out deep-rooted trees and you replace them with more shallow-rooted plants like shrubs and grasses, those don’t have access to as much water and they don’t use as much,” Thompson explains. “So in the absence of those trees, you’re storing more water in the soils and groundwater, and that leaves the whole system more primed to start creating runoff and streamflow.”

Snowpack is another important factor, although somewhat less intuitively: rather than cooling snow with shade, at the right elevation a dense forest can actually make it melt by trapping heat. Monitoring in the Illilouette Creek Basin over the past three winters has shown that snowpack is larger and persists for longer in burn gaps, Thompson says.

Put simply, more frequent, smaller fires mean more water. “Everything we see points to a wetter landscape: a watershed that has more water stored in its soils and in its groundwater, where the trees seem to get through the drought a bit better than trees in neighboring landscapes, and where we think there’s an increase in the amount of stream flow that’s coming from the basin.”

Granted, the size of the streamflow effect is small: increased annual runoff from the basin today is estimated to be roughly seven million cubic meters — or about 1/60th of the capacity of the Hetch Hetchy reservoir — above what it was pre-1972. But replicate that at a few additional sites in a state that already needs more water and is staring down a drier, hotter climate, and the implications are positive.

“Given that we are facing a future where we’re expecting everything to head in the other direction as far as water availability from these watersheds goes,” Thompson says, “it seems like a management strategy that might start to give us more resilience for water resources.”

“The hydrology is changing here”

A native of Australia who holds a Ph.D. in environmental science from Duke University, Thompson first came to Berkeley in January 2012. Although her interest in how ecosystems and water cycles interact — a field known as ecohydrology — extends well beyond fire, it was during her very first weeks here that she became intrigued by the Illilouette Creek Basin.

The introduction came by way of esteemed Berkeley fire ecologist Scott Stephens, a professor in the College of Natural Resources’ Department of Environmental Science, Policy and Management who has worked in the basin for the better part of two decades. His own research there began shortly after the Hoover Fire of 2001, which burned more than 7,000 acres and cleared large, dense stands of lodgepole pine in the southeastern portion of the watershed.

“After the Hoover Fire, we walked into a few of these places, and even in the middle of summer, you’re walking in four inches of water,” Stephens recalls. Where before had stood a forest now grew a wetland. “When I just pondered that, I said, ‘My goodness, it looks like the hydrology is changing here.’”

Suspecting she might be able to help, Stephens shared this observation with Thompson during her third week on campus. He was right, and they’ve been working together ever since. The modern history of the Illilouette Creek Basin, meanwhile, reaches back to the mid-1870s. That’s when the National Park Service (NPS) officially adopted the policy of fire suppression that would be overturned a century later. During that period, Stephens says, the NPS extinguished about 80 fires in the basin, the largest of which grew to just a couple of acres. In other words, this 40,000-acre parcel experienced no significant fires for 100 years — an astonishing fact given that, as research out of Stephens’ lab later demonstrated, in preceding centuries it had burned once every 8–15 years.

That all changed when the NPS, spurred by new research illustrating the importance of fire to Sierra Nevada forests, lifted the policy of suppression within the Illilouette Creek Basin in 1972. Instead, it adopted an approach known as “prescribed natural fire,” which stipulates that unless the flames threaten to escape or to generate harmful levels of smoke, they’re allowed to start and end on their own, with no human intervention at all.

That’s exactly what has happened with the vast majority of fires to ignite there in the last 45 years, Thompson says, including the very first, which kicked off the post-suppression era with a bang in 1973. After the 2001 Hoover Fire, the basin burned again in 2004 in another area, then stayed quiet until last summer’s Empire Fire, which gave Thompson and Stephens the chance to watch it transform in real time. Cumulatively, forest cover has been reduced by about 20 percent since the reintroduction of fire.

The Illilouette Creek Basin may be unique in Yosemite, but it’s not entirely alone. About 80 miles south, in the heart of Sequoia-Kings Canyon National Park, lies the Sugarloaf Creek Basin, at a similar elevation and also about 40,000 acres in size. Although it’s more remote and less studied, it has a very similar fire history to that of Illilouette Creek: fires began being suppressed in the 1870s — with great success — but were allowed to return starting in the 1970s. Together, these remain the only large parcels of public land in the state that are allowed to burn.

Sugarloaf doesn’t burn as frequently and has been monitored less, Thompson says, but for research purposes it provides a counterpart to Illilouette where, going forward, similar questions can be asked and ideas tested about changes to the water cycle triggered by wildfire.

Boots on the ground

To better understand the fire-water connection within both basins, Thompson, Stephens and their collaborators — including Katya Rakhmatulina, a Ph.D. student in systems engineering from Thompson’s lab, who is the current student lead on the project — have employed a mix of historical data, remote sensing and fieldwork.

Historical sources include old aerial photographs, stream-flow measurements collected downstream on the Merced River since 1905, and precipitation data also extending back to the early 20th century. At both sites the team maintains three weather stations: one in a wetland, one among shrubs and one in a forest. These continuously gather data on climatic variables including temperature, precipitation, wind speed and soil moisture. They also record visual images that are helpful for monitoring snowpack. But none of this would be possible without boots on the ground, and these days those boots most often belong to Rakhmatulina. Since teaming up with Thompson last summer — after taking over for Gabrielle Boisramé, who helped launch the project and earned a Ph.D. in environmental engineering in 2016 — Rakhmatulina has spent weeks in the mountains, manually sampling moisture levels in soils and woody debris or downloading data and replacing sensor batteries. The work involves skiing or hiking in and then camping out, often for days in a row, even in snow, she says.

Back at Berkeley, Rakhmatulina analyzes data and refines and tests the team’s hydrologic model of the Illilouette Creek Basin. “Once you have set up the model, you can start playing with it,” she says — to see what changes with things like snowpack and streamflow. “You can start with modeling historical fires, then increase their frequencies, and add the effects of future climate change.”

Along with this work factoring in the latest projections, Thompson says she’d like to investigate whether the altered water cycle in the Illilouette may be changing how the fire cycle works, with the wetter soils and fuels. She and Stephens have also discussed the possibility of studying water-cycle effects of mechanical forest thinning downslope in more populous areas.

Many of Thompson’s future contributions will be remote, however, since she’ll be taking an associate professor position the University of Western Australia. However, Thompson will remain an adjunct professor at Berkeley and continue to co-lead the project from afar.

The research’s ultimate goal, she says, remains unchanged: to generate data for California forest managers that may aid in the weighing of different approaches. That could mean continued fire suppression; low- to moderate-intensity prescribed burns that reduce fuels on the forest floor but don’t clear many trees; costly mechanical thinning; or, finally, expanding the practice of managed wildfire — which Thompson believes may be appropriate for nearly a fifth of the Sierra’s total area.

“I think there’s momentum in that direction. The concept of managed wildfire has been around for a long time. This isn’t a new idea, but it’s a scary idea. It feels like relinquishing control,” she says. But in many ways, the message is already clear: “We really need fire in these ecosystems.”