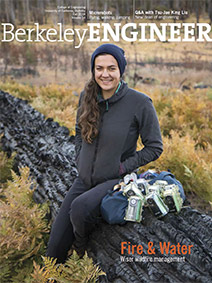 Tsu-Jae King Liu began her appointment as the 13th dean of Berkeley Engineering in July, becoming the first female dean in the college’s 150-year history. She has been an international leader in the field of electrical engineering for more than 20 years, known for her pioneering research in semiconductor devices and technology, as well as her accomplishments as a teacher and administrator. She earned her B.S., M.S. and Ph.D. degrees in electrical engineering at Stanford University, then worked as a researcher at Xerox Palo Alto Research Center (PARC) before joining Berkeley’s Department of Electrical Engineering and Computer Sciences (EECS) faculty in 1996. She has held several key administrative positions at Berkeley,  including vice provost for academic and space planning from 2016–18 and EECS department chair from 2014–16. Let’s start by talking about your background and how you first became interested in engineering.

My parents both came from Taiwan to the United States for graduate study. As graduate students at Cornell University, they met, got married and had me. My mother studied chemistry, while my father studied applied physics, although he had majored in electrical engineering at National Taiwan University. Growing up, I met many of my father’s former college classmates at their annual reunions. Many had become engineers, so I got a sense back then that engineers were respectable and made a good living.

What brought you to California?

After earning his Ph.D. degree from Cornell, my father moved our family to California to pursue earthquake research. He did postdoctoral work at Caltech and UCLA before moving to the Bay Area to work at the USGS (United States Geological Survey) in Menlo Park. I grew up in Los Altos and consider it my hometown.

I applied to just a few universities during my junior year in high school, figuring that if none of them admitted me, I could always stay for my senior year and apply again the following year. I ended up getting into MIT, Caltech, UC Berkeley and Cornell; I chose Caltech because it was small and not too far from home.

In making this choice, I didn’t realize that diversity — or, rather, the lack thereof — would be an issue for me. During my freshman year, the ratio of men to women was roughly 10 to 1. It wasn’t that women were considered inferior intellectually. But when the ratio is so unbalanced, it doesn’t make for a normal social climate. I was very shy back then and uncomfortable with the extra attention paid to me as a female student. That’s why I ended up transferring the following year to Stanford.

How have things changed with regard to diversity since you were a student?

While diversity has improved in some sub-fields of engineering, it has declined in others. According to the National Center for Science and Engineering Statistics, diversity in engineering overall and in computer science has dropped in the past decade. Today, less than one in five bachelor’s degrees in engineering or computer science in the United States is earned by a woman; the numbers are worse for underrepresented minority groups. This has resulted in low representation among engineering and high-tech industry professionals. The shortage of diverse role models in engineering perpetuates this issue.

This is an urgent matter because the pace of technological advancement is increasing. According to the Bureau of Labor Statistics, the United States faces a long-term deficit of workers skilled in computing and information technology. At the same time, women hold nearly 60 percent of jobs with a very high risk of computerization. Each of these issues can be addressed by closing the diversity gap and having engineers and computer scientists better represent the general population.

You’ve presented an interesting perspective of Berkeley Engineering’s mission, one that considers diversity, equity and inclusion to be intrinsic values: Educating Inclusive Leaders, Creating Knowledge Equitably and Serving a Diverse Society. Can you explain why?

A key measure of the college’s success is its impact. Today we live in a globally interconnected society comprising individuals of different racial, ethnic, cultural and socioeconomic backgrounds, who have a range of political and religious views, with differences in gender and sexuality, age and physical ability. To maximize the breadth of our discoveries, creativity of our innovations and reach of our educational programs, we must include the perspectives and value the contributions of people from every segment of our diverse society. Likewise, in order for our alumni to become more effective leaders, they must learn to be inclusive. I aim to elevate Berkeley Engineering to a higher level of excellence and impact by fostering an inclusive community so that all members can thrive and reach their full potential, with transformational impact in the fields of engineering and computer science.

There is a growing body of published research showing that diversity is advantageous for large organizations, as measured by financial performance and other metrics of success. A distinguished alumnus, Chancellor Gary May of UC Davis, gave a commencement speech at Berkeley in which he noted that air bag systems in cars were designed with the adult male body in mind. As a result, many smaller passengers were injured when these systems were first deployed. Gary also noted that sensors in automatic faucets still fail to detect the back of his hands because of his dark skin. These examples illustrate why diversity within engineering teams is important.

Some college-sponsored initiatives to foster inclusion include the Women in Technology Initiative at the University of California (WITI‌@‌UC), which I co-founded to address barriers for women in the tech industry. We also partnered with Michigan Engineering to host the NextProf Nexus workshop on the Berkeley campus earlier this year, as part of a nationwide effort to strengthen and diversify the next generation of academic leaders in engineering.

What are some of your near-term goals as dean?

UC Berkeley stands out for its breadth of excellence; we have the greatest number of graduate programs ranked in the top five by the National Research Council. By strategically leveraging this strength of the campus — as well as our proximity to Silicon Valley and San Francisco — we can gain an advantage over competing schools and colleges. Therefore, I aim to build or strengthen collaborative ties with other academic units on the Berkeley campus, with the Lawrence Berkeley National Lab and with industry. Collaboration with the social sciences and humanities becomes all the more important with the growing economic, social and political impacts of technological advances.

What opportunities and challenges are ahead in engineering education at Berkeley?

An ongoing challenge is accommodating burgeoning student demand for computer science courses, including at the upper-division level, with limited resources such as funding for teaching assistants, classrooms and lab space. I think there are exciting opportunities to leverage the tremendous advancement and proliferation of information and communication technology to effectively deliver educational content in new ways to enhance student learning and also to expand the reach of our programs, for example to students and working professionals around the world.

As the average life expectancy continues to increase, people will work for more years before retirement. Especially for those looking to re-enter the workforce or change careers, there is a growing need to update one’s knowledge and skills — all the more so as digitalization transforms the nature of work, eliminating jobs that can be automated. We should aim to make our engineering programs as broadly accessible as possible.

What’s your long-term vision for Berkeley Engineering? How do you see it looking in 10–15 years?

The culture within the college will be more inclusive, setting new standards for excellence and access in research, education and service to society. Since Berkeley Engineering is the largest supplier of technical talent in the Bay Area, it is my hope that our graduates will become ambassadors of equity and inclusion and transform the culture in the tech industry and in engineering. That is the level of impact that the leading college of engineering in the world should aspire to.