Home > News > Back down to earth Back down to earth

Materials science professor Ting Xu is re-engineering plastics for the age of sustainability.

The humdrum task of garbage-sorting can elicit confusion or even suspicion. Compost? Recycle? Are those corn-based disposable forks truly compostable or are they just feel-good trash? Many recyclable plastics never even make it into the right bin, and while products with terms like “eco” and “plant-derived” in their brand names can let us feel like we are making Earth-friendly choices, scientists say their benefits may be oversold.

“To be compostable, everything has to be gone in about 60 days,” says materials science and engineering professor Ting Xu. Plant-based plastics will biodegrade in composting conditions, meaning they’ll eventually break down completely, she says, but most won’t do it within the typical compost cycle, which forces municipal and industrial composting facilities to pull them from the mix. And when they end up in landfills, as they often do, they last as long as conventional plastics — forever.

Waste disposal is a problem the plastics industry only recently took on.

“Sustainability was never a design criterion,” says Xu, who is also a professor of chemistry. The industry, a relatively young one, did a great job of providing affordable, durable consumer products, she says. It’s only recently, with the emergence of a waste crisis — plastic bags, straws and tiny pellets ubiquitous in the environment — that the end of the plastic life cycle has moved to the design fore.

Xu’s lab has been working on that life cycle-based design, most recently addressing an urgent need for affordable, sustainable plastics made from renewable resources that can easily and safely compost, materials called bioplastics. In an April 2021 issue of Nature, her lab demonstrated a new bioplastic that completely composts within weeks because of the unique way that enzymes they implanted in the material digest the plastic from within. The process is a breakthrough that could make all single-use consumer plastics truly compostable, solving an entrenched environmental and human health problem.

Disposal of single-use plastics has confounded scientists because to be effective consumer products, they need to be stable, but to be good garbage, they need to break down. It’s a sticky materials science problem. When conventional plastics break down, they don’t go away; they just form smaller, ever tinier plastic — visible pellets called microplastics and, eventually, tiny particulate matter called mini-microplastics. This detritus is everywhere — in the ocean, the soil, the digestive systems of marine life — so much so that some scientists have called our current era the “Plasticene.”

Considering the ubiquity of microplastics, not much is known about their effects on human and environmental health — so little that both the National Institutes of Health and the National Science Foundation (NSF) have called for more research in the area. What we do know, Xu says, is that plastics, which contain all kinds of chemical additives, are everywhere in the environment and can be taken up by the body like any other particulate matter.

The plastic disposal problem has created an urgent demand for biodegradable plastics. That’s why Xu’s research includes funding from the Departments of Energy and Defense, and this August she was awarded a $2 million NSF grant to lead a group of sustainable plastics researchers from across the United States. A start-up company commercializing her lab’s discoveries has received early financial backing.

The new material self-digests because researchers implant it with polymer-eating enzymes, which suggests an image of the classic video game hero Pac-Man gobbling up glowing dots. That’s not too far off from what’s happening, Xu says, except that polymers, strings of molecules that form plastics, are more like long noodles that Pac-Man must slurp up from one end to the other to digest. Chomp them in the middle, she explains, “and you still have noodles — they’re just going to be shorter.” In other words, they’ll be microplastics. That’s why Xu mainly chooses to insert enzymes that have processive depolymerization characteristics — they slurp — and she can use a highly precise process to convert some enzymes from a chomping to a slurping action.

To implant enzymes in a material, researchers add water to the enzymes and the coating, both solids, then combine the two resulting liquids at high speed. Since water isn’t needed for plastic production, it is extracted through vaporization. The material can then be synthesized into a film or shape.

Researchers left their enzyme-charged polylactic acid, a common so-called compostable plastic, in two test situations: warm water and soil. In both cases, the plastic quickly broke all the way down to lactic acid, an organic compound that can feed soil microbes.

In addition to the enzymes’ slurping action, two other innovations make Xu’s process both affordable and scalable for manufacturing.

One of the lab’s biggest innovations is preserving the power of the enzymes by encasing them in a special protective coating called random hetero polymers, or RHP, an earlier breakthrough that was 10 years in the making. Xu, with two co-inventors, patented the work in 2018.

Aaron Hall (M.S.’18, Ph.D.’20 MSE), who co-authored both the bioplastic and enzyme-coating publications, likens the encasement to personal protective equipment. Just as firefighters need protective gear to enter a burning building, he explains, enzymes — proteins that live inside a cell — need protection from the unnatural environments of synthetic materials. “We want them to be able to go into a chemically diverse environment they wouldn’t normally like to be in,” he says, “and still have them retain their shape and function so they can do the job that we’re hoping to get out of them.”

The researchers also developed a mechanism for making enzymes disperse evenly and efficiently when added to the plastic.

The combined result of all these advances is that using only a tiny bit of enzyme — just 0.02% of the material — produces a highly efficient reaction, making their bioplastic inexpensive to produce. To achieve the same reaction without protecting the enzymatic activity, Xu says, the material would need to use a vastly higher percentage of enzymes — at least 10% — to achieve comparable results. She likens the economics to bread baking. “Dough only uses a little yeast,” she says. “If 10% of the dough is yeast, the price is going to skyrocket.”

But, she adds, a material that was 10% unprotected enzymes wouldn’t even be functional because the enzymatic activity wouldn’t be retained. “The mechanical properties are going to be terrible; it’ll crumble before you use it,” she says. That’s why she calls enzyme stabilization “the foundational technology that makes us different.”

Keeping the amount of additives low means it can easily plug into the existing manufacturing structure. “Manufacturing is set up to make plastics a certain way,” Xu says. “You have to come into the existing infrastructure — you can’t expect that everything’s going to change for you because it would be too expensive.”

Hall founded the startup Intropic Materials to focus on the formidable task of getting the lab’s self-digesting bioplastic to market. As a 2021 fellow of Activate, a nonprofit that supports entrepreneurial researchers who are building technologies that can benefit society, he’s receiving two years of support that includes instruction, mentorship and significant funding for salary and research.

As CEO, he’s also allowing time to explore the enormous possibilities of RHP. From vegan burgers to makeup that uses artificial collagen, synthetic biology relies on enzymes, and RHP could allow these processes to scale up. With RHP, a whole breadth of enzymes could be utilized for all kinds of sensors, Hall says, such as tests for specific biomarkers or toxins in the body, or labels on food storage containers that indicate food spoilage. Stabilized enzymes could also preclude the need to refrigerate insulin, vaccines and protein-based therapeutics for diseases like cancer.

“We’re able to use enzymes in a wider variety of conditions than current manufacturing can, and still get the same efficiency, the same clean reaction,” Hall says. “I think it’s almost our obligation to try to bring as much of that to the world as possible because we’re able to create more effective, more efficient, cleaner and faster ways of producing materials and, hopefully, making new types of devices.”

Hall expects the company to eventually roll out other products. But for now, he is focused on getting the Xu lab’s composting-plastic breakthrough to an eager marketplace; one estimate projects the bioplastics market will grow to more than $25 billion by 2027. “Maybe some of it was prescience and some of it was luck, but the core technology we were developing turned out to be solving a problem that people care about,” he says.

One size does not fit all

As a science adviser to Intropic Materials, Xu shares Hall’s vision that all single-use consumer packaging can and should be compostable to protect the environment. However, that’s only one small subset of plastics, she says; not every plastic needs to be broken down.

In the U.S., she says, processes for recycling and upcycling properly sorted plastics are mature — a milk container might become a chair and then part of cement, for example. Other plastics, like those inside cars, airplanes and spacecraft, need to be as durable as possible and should not degrade at all.

Xu’s point is a fundamental engineering principle: Decisions about materials depend on their intended use. How a plastic is made, including additives like enzymes, controls how long it will take to degrade and under what types of conditions — hot, cold, wet, dry. “Manufacturing decisions depend on the setting and the purpose for the material,” she says.

Manufacturing decisions also need to be governed by environmental responsibility, she adds. She made a careful choice to work with enzymes, which are just molecules that break down; they can’t replicate, like viruses. Other chemical agents may create harm, known and unknown, once they are released into the environment. Her Nature study doesn’t offer a specific solution, but instead issues a warning to “put a leash on” any additives so they don’t end up like microplastics — running wild in ecosystems.

The suite of benefits and concerns that plastics carry with them — the environment, human health, business and manufacturing — is why Xu’s lab takes a team approach. Researchers include partners in public health, environmental science, civil engineering and chemistry, studying issues like ingredient toxicity and upcycling waste into building materials. Business and nonprofits partners, including Hall’s startup, look at scaling up and following Environmental Protection Agency guidelines.

Xu thinks her team will be working on plastics for a long time — her lab is also looking at ways enzymes can improve the upcycling of conventional plastics. The disposal problem is not going away, she says, so she’s committed to designing them responsibly. “Plastics aren’t evil — they just need to be engineered correctly for each specific use,” she says, which means striking a balance between biodegradable and non-biodegradable. “Any future materials and devices, any products — you just have to add sustainability into the design criteria.” The philosophy should apply to everything people make, she adds, from electric car batteries to solar panels. “If we do that, I think we have the technology to make sure we live in harmony with nature.” 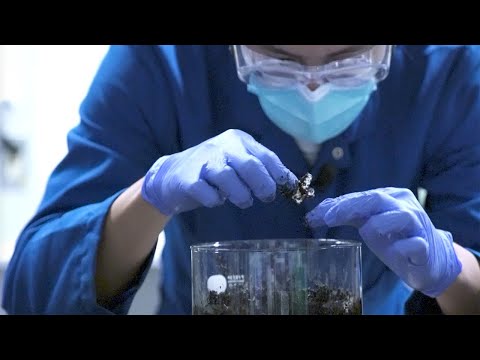