Hundreds of free-range fox squirrels have made the Berkeley campus their home, where they impress students and visitors alike with their bold athletic feats. To better understand how the squirrels’ agility is tied to the split-second decisions they make while navigating tree canopies, a research team including Robert Full, professor of electrical engineering and computer sciences and of integrative biology, took to a eucalyptus grove on the west side of campus, where they set up an outdoor apparatus complete with branchlike perches. Using peanuts to entice the wild squirrels to leap from perch to perch, the researchers were able to observe how these mammals alter their movements to make successful landings, time and again. 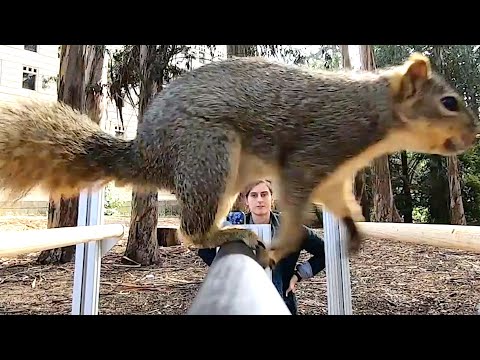 The researchers found that the squirrels could consistently leap from unfamiliar types of simulated branches, regardless of the flexibility, without ever falling. After launching from a starting point, the squirrels adjusted their bodies midair, and then again as they landed, adapting their maneuvers to the stability of the individual branch.

The researchers also observed the squirrels utilizing parkour-type maneuvers in which they bounced off nearby walls in order to cross the largest gaps between perches, using those vertical surfaces to modify their speed. When they didn’t land squarely on a perch, the squirrels used special moves — such as rolling over or under the branch, or grasping the branch with their sharp claws — to stabilize their bodies before pulling themselves up. When navigating the same bendy branch multiple times, the squirrels’ landings became increasingly steadier with each successive leap.