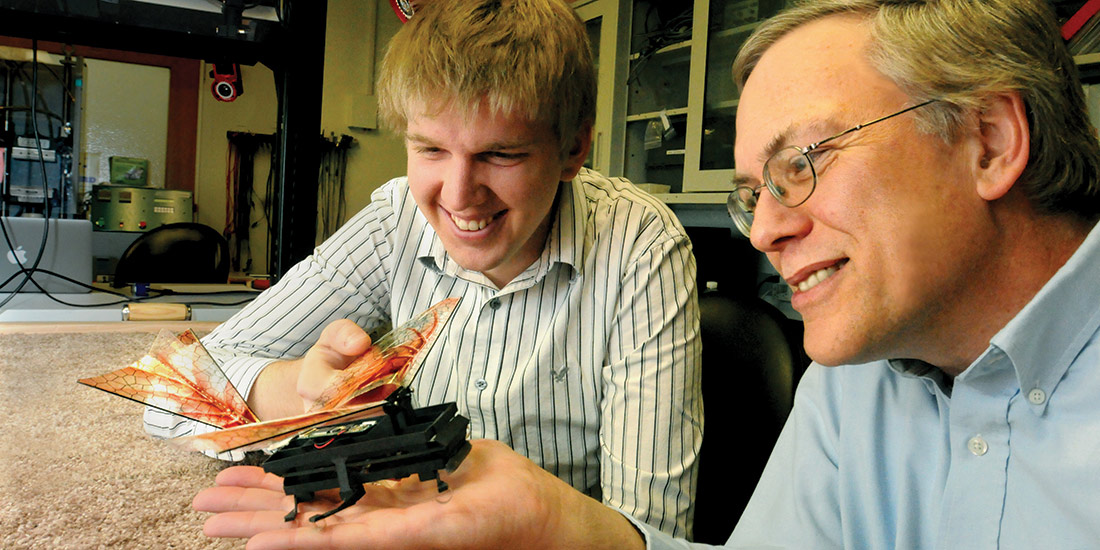 DASH grows wings and sails into an old debate

Graduate student Paul Birkmeyer designed the original DASH to search collapsed buildings and tight spaces and relay information back to its handlers via sensors. But even with six legs, the autonomous robot struggled over uneven ground and was prone to tipping over when dropped from heights. That’s when graduate student Kevin Peterson and Ron Fearing, EECS professor and head of the Biomimetic Millisystems Lab, decided to attach wings. The result, a running and gliding robot, sparked the interest of Robert Dudley, professor of integrative biology, who thought that DASH’s evolution was a physical example of computer models that suggest a similar pattern in animal flight evolution. Little is known about early flight because of holes in the fossil record. Now, a small roach-like robot with plastic wings borrowed from a toy is providing important insights into the natural history of flight. A: The original six-legged, roach-inspired DASH was designed as a low-cost search and rescue robot, but its mobility over rough terrain was limited due to balance and speed. So the researchers decided to attach wings. B: Legs and tail wing only; testing to see how the rudder-like tail affected overall speed and stability. D: The addition of flapping wings made DASH perform much better than in any of the control groups in all areas of locomotion, from horizontal speed to attainable incline and glide slope.

A lack of evolutionary data and conflicting models allow for several competing theories about the origins of flight. One theory suggests that land animals developed wing-like appendages that increased their speeds enough to achieve lift-off for flight. Another theory suggests that flight was an adaptation developed by early tree-dwellers with feathers on four appendages and long, feathered, rudder-like tails that helped them glide to the ground. While the comparison between early avian animals and a six-legged robot with plastic toy wings is not perfect, it does offer insight into which theory might be more plausible. Adding flapping wings to DASH increased its performance both while running and gliding, but not so much so that it can take off on its own. The finding supports the hypothesis that flight developed from tree gliders.

DASH+Wings is not alone in the lab. Researchers at the Biomimetic Millisystems Lab recently introduced two other DASH-like robots: BOLT (left), the Bipedal Ornithopter for Locomotion Transitioning, has two legs and wings and can take off in less than a meter.

OctoRoAch (right), a hand-sized, eight-legged crawler that uses a gyro to steer.