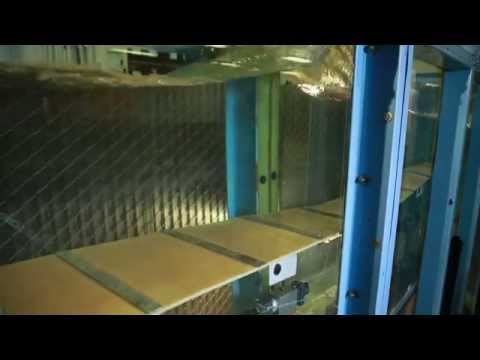 That potential hasn’t escaped the notice of ocean engineers, especially Reza Alam, an assistant professor of mechanical engineering at Berkeley since 2011. His research into how muddy seabeds absorb wave energy led him to explore how a mechanical device might convert that energy into electricity.

Harnessing wave power is more complex than the process of converting other renewable energy sources like wind or sun into electricity. Wave heights and frequencies can vary wildly over time and from one shoreline to another. Seawater is highly corrosive. And storms can turn reliable and predictable waves into machinery-destroying battering rams.

The energy market is an equally extreme environment. To survive it, commercial wave energy converters, which the Wave Carpet is on track to become, must produce electricity at a cost equal to, or lower than, that of fossil fuels or more established renewables like solar and wind.

The undulating Wave Carpet membrane sends wave energy to a generator onshore. (Courtesy the researchers)Alam’s research first examined how human-modified sea floors could mimic the ability of muddy shoreline seabeds to dampen and absorb ocean wave energy. Alam then began considering how a synthetic seabed might harness that wave power to produce electricity, and this research led Lehmann to eventually develop the Wave Carpet.

A flexible membrane that runs the length of each Wave Carpet undulates in response to passing waves, absorbing much of their energy, just as muddy sea floors do.

Fastened to the membrane are a series of vertical double-action pumps. When flexed by wave energy, the membrane drives the pumps to pressurize and push seawater through a shared discharge pipe. The water gushing through that pipe powers a shore-based turbine that can generate electricity, drive a desalination plant, or do both.

An average device will measure about 30 feet long by 30 feet wide and about 3-10 feet high, depending on local conditions, says Alam. Several devices can also be sited together on one shoreline to power one or more turbines.

The team filed to patent the Wave Carpet in 2012. In 2014, with support from Alam and the CITRIS Foundry, Lehmann led the effort to land a two-year, $500,000 grant — under the name CalWave — from Berkeley Lab’s clean energy incubator, Cyclotron Road, to support continued work on the wave energy converter. Alam also arranged support from Berkeley’s civil and environmental engineering department, including access to the O’Brien Hall wave tank.

The Wave Carpetters are currently hip-deep in the Department of Energy’s prestigious 20-month wave energy design competition. After successfully completing a 1/50-scale tank test of its device in January, the team received the highest score of nine finalists. Finalists receive seed money to develop 1/20-scale models to be tested this summer at the nation’s most advanced wave-making facility, the football field-sized Naval Surface Warfare Center’s Maneuvering and Seakeeping Basin in Maryland.

Lehmann says the team plans to put a demonstration device in the sea later this year.