Microscopic models of the human heart

A decade ago, stem cell research was in turmoil. Kevin Healy, professor of bioengineering and materials science and engineering, recalls that “with embryonic stem cell research, we had to have labs that were carved out” — segregated, to track every penny of federal funding — “and we could only do certain kinds of work.”

When the first stem cell lines were derived from human embryos at the University of Wisconsin, in 1998, Congress had already banned federal support for research with human embryos. In 2001, the ban was extended to embryonic stem cells. Except for research on a score of pre-existing cell lines, grants had to come from private or other sources. Researchers couldn’t even use test tubes bought with federal money. 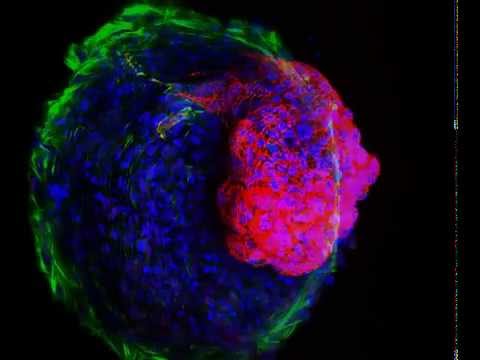 Everything changed in 2006. Researchers at Kyoto University succeeded in transforming ordinary skin cells from adult mice into pluripotent stem cells —- which, like embryonic stem cells, could be coaxed to become virtually any tissue in the body, including heart, liver and nerves. In 2007 the technique was extended to human cells.

“Induced pluripotent stem cells really changed the whole equation,” says Healy. “The political issues we had to deal with are all gone. It’s such a relief just to do the science.”

Since then, Healy’s laboratory has been a source of rapid advances in the technology of human induced pluripotent stem cells, or hiPSC (often shortened to iPS). Earlier this year, Healy and his collaborators and colleagues introduced two novel structures based on human cardiomyocytes — heart muscle cells — derived from iPS cells.

One is a “heart on a chip,” a thousand or so cardiomyocytes arranged on a silicon chip, beating with the regularity of a human heart. The other is a “heart on a dot,” a three-dimensional chamber of throbbing cardiomyocytes, self-organized inside a microscopic circle on a flat surface. Both devices are measured in micrometers (millionths of a meter), their greatest dimensions no wider than a few human hairs.

A heart on a chip

“Biology didn’t really get started in the materials field until the early 1990s,” says Healy, who got his Ph.D. in bioengineering from the University of Pennsylvania in 1990 and spent the next 10 years on the faculty of Northwestern University. At first, like most other such programs, “the biomaterials program at Northwestern was largely abiotic — involving no cells and no real biology,” he says with a laugh. “When you put an implant in the body” — the Teflon component of a vascular graft, say, or a metallic stent — “you had to wonder, how long is this going to last?” Change was well underway by the time Healy came to Berkeley in 2000. “It had become obvious to ask, ‘What if you made these implants out of biological materials instead?’” The advent of nanostructured materials and, later, adult stem cells encouraged Healy to envision different miniature organs, housed on chips reminiscent of integrated circuits. “Instead of conducting electricity, there would be spaces where cells can sit and nutrient fluids would bathe the cells in a controlled manner,” he says.

Intrigued by this vision and its potential applications, Anurag Mathur joined Healy’s lab as a postdoc in 2012. Mathur’s parents, doctors in India, inspired him “to contribute to medicine and biology — in my case, through bioengineering.”

The smallest unit of the heart consists of layers of cardiomyocytes confined between supporting collagen fibers. Mathur and post-
doc Peter Loskill worked with Healy and bioengineering professor Luke Lee to model this structure on a chip. They reproduced naturally aligned, layered heart cells in a silicone confining chamber, 150 micrometers wide and less than a millimeter long.

Mathur fabricated the chamber’s support system the way integrated circuits are printed on silicon, in etched layers. Large channels imitate blood vessels, supplying nutrients to the cells. Channels only two micrometers in diameter perforate the confining chamber’s walls, allowing the nutrients to bathe the cells gently, much as blood diffuses through a protective layer of epithelial cells.

Human iPS cells were supplied by Healy’s collaborator Bruce Conklin, of the Gladstone Institutes and UC San Francisco. In the Healy lab, the stem cells assumed their cardiomyocyte identity through a process called differentiation, the carefully timed application of chemicals that activate specific genes.

Two weeks after differentiation began, the cells were loaded into the confining chamber. Within 24 hours they began beating, 55 to 80 beats per minute. Within a week, they formed into multiple layers, aligned themselves and beat in unison.

The researchers tested four kinds of well-studied cardiovascular drugs on their tiny model, comparing the rates of its beating cells to the drugs’ known effects on the human heart rate. Some results were far more accurate than those from animal tests or other methods. For example, based on mouse studies, Verapamil, a treatment for high blood pressure, would be considered too dangerous for humans. But a human heart averages 60 beats a minute. A mouse heart beats 600 times a minute, producing test results that cannot reliably be extrapolated to humans. The heart on a chip reaffirmed clinical observations showing Verapamil to be safe.

To develop and launch a new drug takes 10 to 15 years, at an average cost of $5 billion; heart or liver toxicity often shows up late in the process. Says Healy, “Reducing the number of animal experiments and better predicting the effects of drugs under development could significantly drive down the average cost per drug” — and shorten the time to market by years — “because you haven’t wasted all that money on drugs that fail after you’ve taken them so far down the pipeline and into clinical trials.”

A heart on a dot

Meanwhile, the Healy lab was pursuing a parallel approach to how materials influence cell behavior, which led to a different, surprising model of the human heart.

“My strength was in polymer engineering,” says Felicia Svedlund, who joined the Healy lab as a graduate student in 2010. “Kevin asked me to work on patterning a polymer surface to study the effects on human stem cell behavior.”

With undergraduate Jason Wang, Svedlund layered a thin film of polyethylene glycol (PEG) onto tissue-culture polystyrene plates. Then they etched away circles of the PEG, 200 to 600 micrometers in diameter. Inside the circles, stem cell colonies that could not grow on PEG could grow on the culture-friendly plates. Gladstone’s Bruce Conklin was a collaborator and provided the iPS cells. The most common birth defects involve the heart. Hundreds of thousands of pregnant women each year are exposed to drugs that could threaten the fetus, but current tests can’t cover the early stages of heart tissue formation. (Photo by Zhen Ma)

Svedlund and Wang established that colonies would form and maintain themselves in the patterned surface she’d devised. When Svedlund turned to other research for her Ph.D., a new postdoc in the Healy lab, Zhen Ma, took over research on the colonies.

Ma began his education in China as an electrical engineer. He used lasers as nanoscale medical instruments in his doctoral work at Clemson University, until a project involving stem cells and cardiomyocytes changed his focus. He says, “I found I was moving to the biology side.”

The original plan was to follow the stem cells to the point where they lost their pluripotency and committed themselves to a specific tissue type. Instead, says Ma, “We saw cells spatially organizing themselves into two different types in one colony.” Confined geometry, plus chemicals in the differentiation protocol, sent cells in the center of the colony moving toward the edge, where they formed a dense ring resembling the epithelium that lines and protects many organs.

To find out what would happen next, Ma and Wang extended the protocol. After two weeks, the uncommitted cells in the center of the dots began differentiating into cardiomyocytes, then kept going, forming 3-D structures with hollow interiors. They started beating — “pumping” like the chamber of a heart, absent the blood. “None of us, including Kevin, saw this project going so far,” says Ma.

Consider a microscopic collection of cells that first organizes a supporting ring and then builds a chamber of beating heart muscle within it, echoing the emergence of the developing heart itself. This remarkable discovery had obvious potential for developmental biology.

However, Ma says, “We are engineers. Engineers think about how this work can be used for the real world. Why not use it to screen the drugs which have toxicity during fetal development?”

The most common birth defects involve the heart. Hundreds of thousands of pregnant women each year are exposed to drugs that could threaten the fetus, but current tests can’t cover the early stages of heart tissue formation.

The researchers exposed their miniature hearts to a drug infamous for birth defects, including heart defects: thalidomide. A small amount damaged the microchambers, weakened the contractions, and retarded the beat rates.

Of the heart on a dot, Healy concludes, “This system can be highly predictive of drugs we know have significant toxicity on early heart-chamber development.”

The miniature hearts offer two approaches to disease modeling, one of the notable promises of stem cell technology. “We are now developing a chip that will link cardio, liver and fat as a triad,” says Healy, with the goal of modeling the interactions of these vital organs. Drugs are metabolized in the liver; fat supplies energy and has important roles in metabolism. Researchers tested four kinds of cardiovascular drugs on their tiny model, comparing the rates of its beating cells to the drugs’ known effects on the human heart rate. Some results were far more accurate than those from animal tests or other methods. (Photo by Noah Berger)

“Almost half the drugs are taken off the market because they are toxic to the heart or liver,” says Anurag Mathur. Interactions between the two organs are synergistic, “so integrating the two chips will be a significant problem. There’s a difference in scale we somehow have to replicate. And we have to find a common nutrient — artificial blood, if you will.”

The miniature heart on a dot presents other challenges. “Because of our present differentiation protocol, we reach the point where these microchambers naturally stop developing,” Healy says. “We’re approaching the problem from a pharmacological point of view, using different chemicals, learning the details of the genes that are expressed.”

Maintaining progress in iPS technology requires advances in many areas, and Healy refuses to oversell current results. “We don’t want people thinking, hey, we’ve solved everything,” he cautions. His lab is hard at work on answers to pressing questions, including stem cell maturity and longevity.

Imagine the regeneration of organs as disparate as heart, spinal cord, even brain — to address Parkinson’s disease or ALS. Imagine growing organs from scratch and transplanting them with no fear of rejection by the immune system. Imagine drug treatments — say, for breast cancer — targeting an individual’s or even a tumor’s specific genetics. The coming months and years will see advances in a technology whose future seems almost limitless.