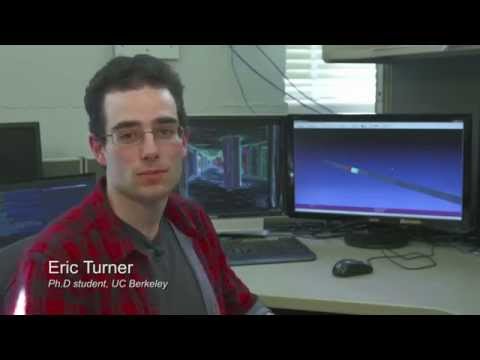 Instead of requiring a week to gather data, as an energy-consulting company did in Berkeley’s Mulford Hall last November, the researchers’ solution involves donning a 30-pound backpack equipped with high-tech cameras and scanners and simply strolling through the building. Using the backpack, it took one person less than an hour to explore a 50-room, 15,000-square-foot floor of Mulford Hall and automatically collect all of the needed information, which was then processed by the system’s custom-built software. When results were tabulated, “the difference between the manual model and the backpack model was very small,” says principal investigator Avideh Zakhor, professor of electrical engineering and computer sciences. “It verifies that with very little time, you can get similar accuracy in predicting the energy models for the building.”

Developed by Zakhor with a handful of graduate students and more than a dozen undergrads over the last eight years, the backpack is finally poised for prime time. And energy audits are far from its only use. In fact, Zakhor had something completely different in mind when she first launched the project in 2007, after an Army Research Office grant sparked her move from creating 3-D models of outdoor environments to modeling and mapping the indoors.

“If you roll back the clock to when I started the project, it was being funded by the Department of Defense for reconnaissance and things like that,” Zakhor says. “And now we’ve moved into other areas.”

To say the least. It’s a testament to the flexibility and robust design of the backpack that it suits so many different applications. Among them: search and rescue (earlier this year, the team tested it on the exterior of a collapsed building in San Mateo); construction (“Before you close off the walls, we want to scan the area to make sure we have documentation of electrical and plumbing,” Zakhor says); and commercial real estate (a walk-through could record valuable information about layout, square footage and other features). The technology could also be used in facilities management and asset tracking (documenting buildings and assets inside for inventory and safety), the gaming industry (virtual walkthrough and navigation of actual buildings) and architecture (recovering floor plans of old buildings without blueprints).

Nick Corso, a graduate student who researches novel algorithms for GPS-free indoor positioning and has been working on the backpack and its companion software since 2010, says he was first attracted to the project because of its potential uses in gaming. “I’m less interested now in the application side than the algorithmic development,” or data processing, he says. “As I started working on it more and more, the technical challenges became more interesting.”

This approach appears central to the backpack’s broad potential. “It could have as many uses as you can dream of,” Zakhor says. The platform is incredibly flexible and can be fitted with various cameras for visual imagery, including infrared, laser scanners for 3-D geometry and assorted air-quality sensors for things like atmospheric pressure, air temperature and carbon dioxide and particulate levels.

“There’s really not a limit, but it does have to remain a wearable backpack. When you add more sensors, you have to provide power to them, which makes it heavier,” Zakhor says. For now, the standard configuration includes less than ten sensors. There’s no fixed price for the setup, either; cameras alone can range from $500 to $5,000.

The unit is equally flexible on the software side. Ongoing development will include the creation of new algorithms to handle all the data pouring in from the hardware. Zakhor says she may also create a scaled-down, handheld device with many of the same core features.

But perhaps no development is more exciting for the team than the grant that Zakhor recently received from the U.S. Advanced Research Projects Agency-Energy (ARPA-E) to commercialize the backpack for a range of uses, including fast building energy audits, facilities management, building documentation and inventory and asset tracking. Zakhor will take a leave of absence over the next academic year to launch a startup with Eric Turner, a graduate student who spent years on the project before graduating this spring, and hopes to introduce the backpack to the architecture, construction and commercial real estate industries. They’re banking that faster and more precise will be an easy sell.