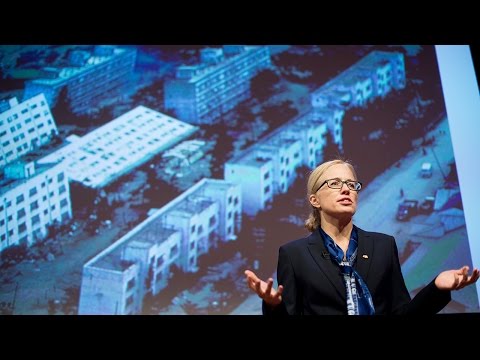 May 1, 2016 by Denise Bui
This article appeared in Berkeley Engineer magazine, Spring 2016

In her lecture, supported also by the Minner Program in Engineering Ethics, Hausler Strand described how her career studying earthquakes and structural issues led to a Ph.D. from Berkeley and a Fulbright Fellowship at the Indian Institute of Technology in Mumbai.

During her time in India, a devastating earthquake hit Gujarat, killing over 20,000 people and destroying over 400,000 homes unequipped to withstand such seismic force. To prevent future destruction, Hausler Strand launched Build Change in 2004.

“When I started Build Change, it was an engineering challenge, but also a social justice issue, because I think everyone deserves the right to a safe house, regardless of their income,” Hausler Strand said in her presentation. “Now it’s 11 years later, and almost a quarter of a million people are living in safer buildings because of our work.”