Thibault Duchemin, pictured here at commencement with his family, has designed a mobile app that offers real-time captioning for deaf users. Photo by Aaron Walburg

Globally, 360 million people suffer from disabling hearing loss — that’s 5 percent of the world’s population. In the demographic over 65 years old, that number increases to 40 percent. Thibault Duchemin (M.Eng.’14 IEOR) isn’t one of them, but he understands the many challenges that deaf people face. Duchemin grew up as the only hearing person in a family of four – his mother, father and sister are all deaf. He has always understood the communication challenges that were a daily part of their lives. Now, he’s developed Transcense – a mobile app that aims to end some of the professional and social isolation caused by hearing loss. Transcense offers the first real-time captioning technology for smartphones, making it possible to have group conversations between deaf and hearing people.

A human bridge between two worlds 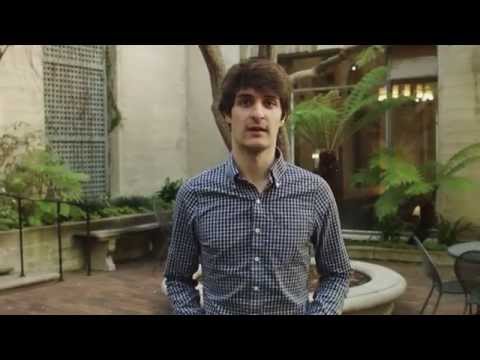 With perfect hearing, Duchemin naturally became a vital connection between his family and the outside world. Surrounded by his parents – an economist and photographer – and his younger sister, he grew up with the feeling of being deaf without physically being so. His first language was French sign language.

“I had no problem switching between deaf and non-deaf communication,” Duchemin says. “I always did translations for my family: answering the phone, meeting with doctors and bankers. It puts you in that position of being useful; it just feels normal. I was a free interpreter, a bridge.”

After receiving his undergraduate degree in math, physics and economic engineering from Ècole des Ponts ParisTech – the school established by King Louis XIV to train engineers who would build his reign’s infrastructure – Duchemin came to Silicon Valley for a yearlong internship at AgilOne in 2012. He liked California so much he stayed and enrolled in Berkeley’s Fung Institute for Engineering Leadership, where he earned a master’s degree in engineering. While at Berkeley, Duchemin met Pieter Doevendans in a social entrepreneurship class. The pair ultimately developed Transcense.

User research showed that one of the steepest challenges for deaf people is following group conversations. Solving that challenge became the focus of the Transcense technology. The partners’ first idea was to develop a glove that a deaf person could wear to translate sign language to voice. But after spending three months on a prototype, they saw a flaw in the device: the configuration was not robust enough for the speech-to-text element to function well.

They needed to develop a technology that was culturally adapted and very accurate. For over a year, they spoke with more than 300 audiologists, deaf individuals and speech and behavioral design experts to redesign the perfect solution. During this process, they met Skinner Cheng – a University of San Francisco computer science graduate student who is deaf – who brought an even deeper understanding of the communications issues facing this community.

As a mobile app, Transcense works in real time from the user’s smartphone and connects all the smartphones in the room. Other participants simply push a single button to join the conversation. “We’ve been able to deliver the world’s fastest captioning experience, usually in under a second,” Duchemin says. “We’re working with the best voice-recognition and transcription systems, and our algorithms leverage the distributed microphone system to know exactly who is speaking.” Depending on variables like background noise, voice pitch and accent, the transcription can reach up to 95 percent accuracy.

On the screen, speakers are color-coded in dialog boxes to illustrate conversational dynamics, and can even show a profile photo, much like a Facebook chat. The system also allows the user to notify others when she wants to speak, and respond with her own voice or a personalized voice on the app. It is presently optimized for six to eight speakers, but can accommodate up to 20.

Currently in private beta testing on Android devices, the app is getting feedback from 20 individuals. The testers include Duchemin’s sister, Pauline, in France, whose goal of becoming an attorney is now much more attainable with the new technology. Last fall, the group launched an Indiegogo crowdfunding campaign to raise $25,000 to expand Transcense to iOS, and raised 115 percent of that goal from funders all over the world in less than six days.

The Transcense group has joined Berkeley’s SkyDeck incubator and now aims to access the app with just a laptop and an Internet connection. Ultimately, they’d like to expand to fit to any wearable device, and to make the platform available in other languages besides English.

Seeing the impact where he lives

Duchemin was elated when he saw how technology could vastly improve lives, and particularly the lives of his family members. He waited until Transcense was fully developed to demonstrate it to them over Skype. “I was talking to them with sign language, then suddenly stopped signing, and they could see the text of my words on their screens. They just started cheering,” he remembers. And with that, one of the deaf community’s greatest sound barriers was broken.

Duchemin says that Berkeley gave him not only the skills, but also the confidence and the right mentorship to build Transcense. “There’s such a support system around you. It’s a connective tissue from older and younger generations, a balance of experience and audaciousness.”