Home > News > The HAB project: A platform for space research 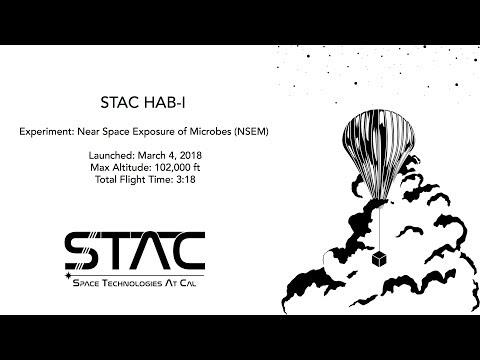 The HAB project: A platform for space research

It’s early on Saturday morning. Right in the heart of campus, on Memorial Glade, a dozen students gather and prepare to launch a high-altitude balloon 100,000 feet into the atmosphere. They are part of Space Technologies at Cal (STAC), a group dedicated to developing new devices and systems aimed at exploring beyond the bounds of Earth.

“What we are trying to do is build a whole space program,” says STAC co-founder and co-president Travis Brashears.

STAC members, who come from a variety of majors, have subdivided into groups to work on projects that interest them. Besides designing and building experimental microgravity payloads (one of which is scheduled for a trip on an upcoming Blue Origins rocket), the students are designing a lunar rover, a biosphere that can create survivable environments on other planets, a cube satellite deployer, and the reason for today’s gathering — the high-altitude balloon (HAB) project.

“Some of our other projects are more like moonshots,” says Abhishyant Khare, a third-year electrical engineering and computer science major and the HAB lead. “The HAB was intended to be a more tangible and concrete project that we could get up and running relatively quickly. We also think it helps make what we are doing more accessible to the wider community.”

The group’s goal is to launch a high-altitude balloon with an attached research payload several times a semester. This April 28 launch, HAB2, is the project’s second. HAB1 was launched on March 4 from Sugarloaf Open Space in Walnut Creek. It flew for three hours and 18 minutes, eventually landing in an orchard outside of Modesto. With each launch, the group will fine-tune the balloon launching process, and maybe more importantly, the recovery of its experimental payload.

High-altitude balloons are a time-honored research tool. Meteorologists started flying balloons carrying weather measurement instruments in the late 1800s. More than a century later, weather balloons continue to be the most effective means of monitoring atmospheric conditions — the National Weather Service continues to launch 92 weather balloons across the United States every day. For STAC, high-altitude ballooning provides a research opportunity that extends beyond looking at weather patterns; it will act more like a platform for other campus-based faculty and students to launch all kinds of experiments. “We are trying to standardize things,” Brashears says, “so that researchers will know how big their payload can be, what kind of electronics they need to interface with (for the onboard flight computer) and what kind of power is available.”

Part of the HAB payload consists of a small insulated container housing biological experiments. Prior to launch, researchers can load microbes onto aluminum plates. Then they can program the flight computer to open the container and slide the trays out on robotic arms while the balloon is in flight, allowing for exposure tests at different altitudes.

Other parts of the payload include cameras, a Federal Aviation Administration-required radar reflector — which the team fashioned out of cardboard and aluminum foil — and a parachute that guides the payload back to the ground once the balloon pops.

Maybe the most challenging aspect of a high-altitude balloon is the recovery. To help with that task, the STAC team developed its own secondary GPS transponder to help pinpoint the precise landing zone. “We put a lot of fail-safes on it,” says Khare. “We want to make sure we can track it.”

In order to test their balloon-as-a-platform idea, HAB participants wanted to start launching experiments as a sort of proof-of-concept. That led them to Tristan Caro, a molecular and cell biology major with an interest in astrobiology and with experience launching balloon-based research.

Caro had an idea for an experiment that was inspired by two scientific papers he read describing how NASA was using balloons to take samples of bacteria in the atmosphere. “What they were finding is that the biosphere was way more complex than we originally thought,” Caro says, “And that bacteria are going through the water cycle.” STAC’s version of what a student-run space program could look like. The group invited industry members to campus for a space technologies symposium on April 30, 2018. (Image courtesy STAC)

The HAB1 launched with three biological experiments aboard. One of the experiments, organized by Caro, was designed to test the survivability of ice-nucleating proteins in Pseudomonas Syringae, a common bacterium. The proteins have captivated the attention of researchers for their role in making water. (The ski industry uses ice nucleates to make artificial snow, and plant biologists study them for their role in crop disease.)

One group of bacteria launched in the HAB1 was exposed to the atmosphere between 90,000 and 100,000 feet. “The experiment showed us that even in conditions much more extreme than on the Earth’s surface, significant numbers of cells survived, indicating resilience during atmospheric transport,” Caro says.

Two other types of NASA-donated bacteria were also flown. Rather than their role in the water cycle, these bacteria are of interest to astrobiologists because they have been found in clean rooms at space facilities.

As space voyages leave Earth at an increasing pace, thinking about microbial stowaways becomes more significant. “One prong of this is planetary protection,” says Caro. “If we are going to Mars, then we have to cognizant of our biological footprint.”

Before launching HAB2 — the flight leaving from Memorial Glade with the same three bacteria to see if they can replicate results from the previous launch — the team made some upgrades to payload, including adding a better ultraviolet radiometer (data collected from that sensor is important if the team wants to publish the results of their work) and a black carbon sensor.

Black carbon is a significant particulate pollutant, yet it’s still poorly understood and its distribution is not well defined.  “We are going to try and get a profile of that above Berkeley and the East Bay because it hasn’t been done before,” Khare says.  “The last testing that we could find any record of was done in the 1970s.”

Like HAB1, HAB2 reached 100,000 feet after leaving the confines of campus. On its return to Earth, it landed on private property in a forest outside of Yosemite National Park. With the help of the property owners, the team searched for the payload, and they think they’ve pinpointed the location. But payload recovery and retrieval of the onboard data will have to wait until after finals, when the HAB team members plan to return to the area with a search party.

Meanwhile, the planning and refinements for HAB3 are already underway. “This whole project is about enabling research done by students,” Brashears says. “We are trying to make small contributions to space research.”