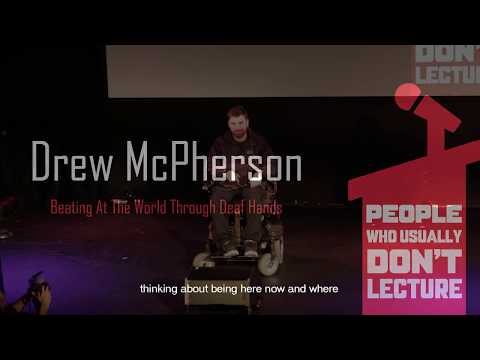 Drew McPherson (B.S.’17 ME) recently took the stage in San Francisco to give a talk at the “People That Don’t Normally Lecture” series. Recounting his own personal journey, McPherson told about an accident he had when he was 19 that left him paralyzed from the neck down. After his injury, he had to rebuild his life and learn a lot of new skills. That process eventually led to his decision to become a mechanical engineer.

“I spent most of my time in high school building stuff, so I thought that mechanical engineering would give me a chance to continue doing that,” McPherson said. “Also, I had this sense that I wouldn’t be wasting my time. It would help me figure out how to make my life easier by learning how to build the tools I need.”

Now a master’s student in mechanical engineering, McPherson spends his free time thinking, designing and advocating for an open-source assistive technology movement. He co-founded the campus-based EnableTech in 2014 as an undergraduate. Since then, the organization has hosted hackathons, events and courses with the goal of increasing collaborations between Berkeley students and people with disabilities.

“There are a lot of expensive medical devices for people with disabilities,” McPherson said. “But consumer products for people with very specific disabilities just don’t exist. If the user base is small, then companies just aren’t going to develop products. There’s a gap.”

McPherson is looking past graduation in May, and with his EnableTech co-founders, he is in the process of making the organization a nonprofit that can expand beyond the university.  “Designing assistive technologies has taught me about designing for a need. Sometimes that’s missing in tech startup culture. Assistive technology doesn’t always have to be for people with disabilities,” he says. “That’s just an acute situation. I guess you could say I’m interested in designing solutions to meet people’s needs.”