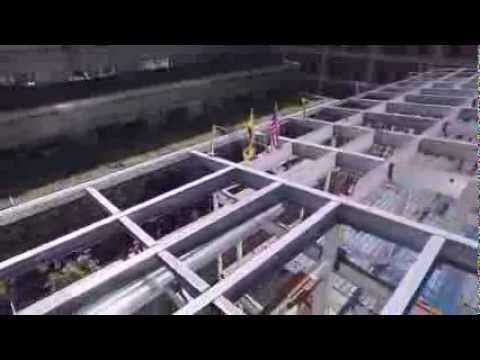 Last Friday, members of the college community, along with the construction crew and benefactors, gathered to celebrate a major milestone: the topping out of Jacobs Hall, a new building steadily rising north of Soda Hall. The topping out marks the halfway point in construction, the outline of the steel frame is complete, and the building will hold nearly two dozen new classes beginning next fall.

While the foundation cures and the girders of the structure settle, the work of the Jacobs Institute for Design Innovation, which will be housed in the new building, is already well underway.

Design education, and the opportunity to ideate, prototype and make devices and products with the latest tools and techniques in digital fabrication are in high demand. Ideas that will have economic and social impact for California, and beyond, are already being sketched.

“Six months from now,” said Dean Shankar Sastry during his celebratory remarks, “we will open a magnificent new home for our Jacobs Institute for Design Innovation. These studios will accommodate more than 300 students at a time and will have 3D printers, an AutoCAD lab and a wide range of other tools.”

“This is an enormously important and significant moment for us,” said UC Berkeley Chancellor Nicholas Dirks. The new center will not only be abuzz with engineering students, but will also offer classes led by faculty from across campus and will be open to students from a variety of disciplines.

Paul Jacobs, a three-time Berkeley Engineering alumnus,  the executive chairman of Qualcomm and a major driver of making Berkeley home to the next generation of design education, said: “It’s so cool to make something yourself. To know that it came from your head and that you can make something tangible, like a building, like a device—literally anything you can think of, and that you can change the world with that.”

“Design innovation is now a reality at Berkeley,” Sastry said.

Read more about the Jacobs Institute for Design Innovation and the new Jacobs Hall in the upcoming issue of Berkeley Engineer magazine.