This summer, Berkeley Engineering hosted 60 fifth, sixth and seventh-graders for a new Girls in Engineering camp designed to inspire middle schoolers to explore careers in STEM fields (science, technology, engineering and math). Part of the college’s longstanding commitment to increasing the ranks of women in technology, the camps were offered free to students from five East Bay schools. 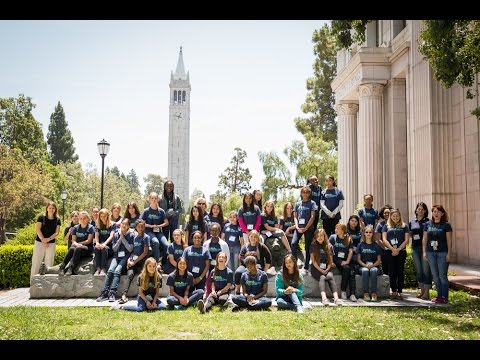 The program was developed and led by senior female faculty and graduate students who hoped to bring engineering to life for the girls, and build the confidence needed to master both the hard and soft skills required of engineering leaders.

“The idea is to introduce girls to engineering in general and to see that it’s fun and interesting,” says program faculty director Claire Tomlin, professor of electrical engineering and computer sciences. “Research shows that by high school age, a lot of girls have already tuned out of careers in engineering.”

Supported by grants from the National Science Foundation, General Electric and the Peggy and Jack Baskin Foundation, two weeklong sessions included hands-on projects in nanotechnology, robotics, optics and more, as well as field trips to nearby Pixar Animation Studios and Lawrence Hall of Science.

Berkeley’s strategies to support women in technology—championed by men and women faculty alike—are having an effect. The spring 2014 “Introduction to Computer Science” course enrolled more women than men for the first time in its history. With tech companies like Google, Yahoo! and LinkedIn recently reporting employee demographics that skew heavily towards men, the college’s efforts to build the K–12 STEM pipeline reflects its vision that women must be better represented in the engineering economy of the future.

“Young women today are extremely empowered, but sometimes it takes somebody to literally tell you: Go; you now have permission,” says Omoju Miller, a Ph.D. candidate in electrical engineering and computer sciences. “Then that’s it; they solve their own problems. That’s the best part — now that we’ve told them there is no ceiling, watch out.”