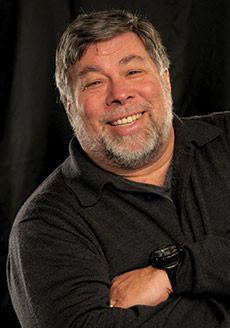 Steve Wozniak (B.S.’86 EECS) might be famous for designing Apple’s first computers, but when he started at Berkeley in 1971, he was best known for his larger-than-life escapades around campus. When not attending class, studying or using Berkeley’s top supercomputer, the future co-founder of Apple Computer was staging elaborate pranks and building gadgets, known as “blue boxes,” which allowed fellow students to make free long-distance calls.

But after his second year, Wozniak, also known as “Woz,” had to take a leave from Berkeley to earn money for school. During that hiatus — which was intended to only last a year — he worked for a few electronics companies before taking a job at Hewlett-Packard. He also designed his own microcomputer, which eventually became the Apple I. To launch the product, he and his friend Steve Jobs co-founded Apple Computer in 1976. The two went on to introduce the Apple II in 1977, starting the personal computing revolution and creating one of the most influential companies in history. Wozniak with his children at his 1986 UC Berkeley graduation.

Wozniak eventually returned to Berkeley to finish his coursework, earning his degree in 1986. After graduating, he founded CL9, which created the first universal remote control, and later, Wheels of Zeus, which made wireless GPS technology. He also worked as a fifth-grade teacher, taught computer literacy to middle and high schools students, created two music festivals and was actively engaged in numerous business and philanthropic ventures.

For his many contributions, Wozniak has been honored with the ACM Grace Murray Hopper Award and the National Medal of Technology, inducted into the Inventors Hall of Fame and named the Cal Alumni Association’s Alumnus of the Year. He was also selected as speaker for Berkeley’s 2013 graduation, where he told students, “My proudest moment of my life…it was my graduation day, right here at this campus.”