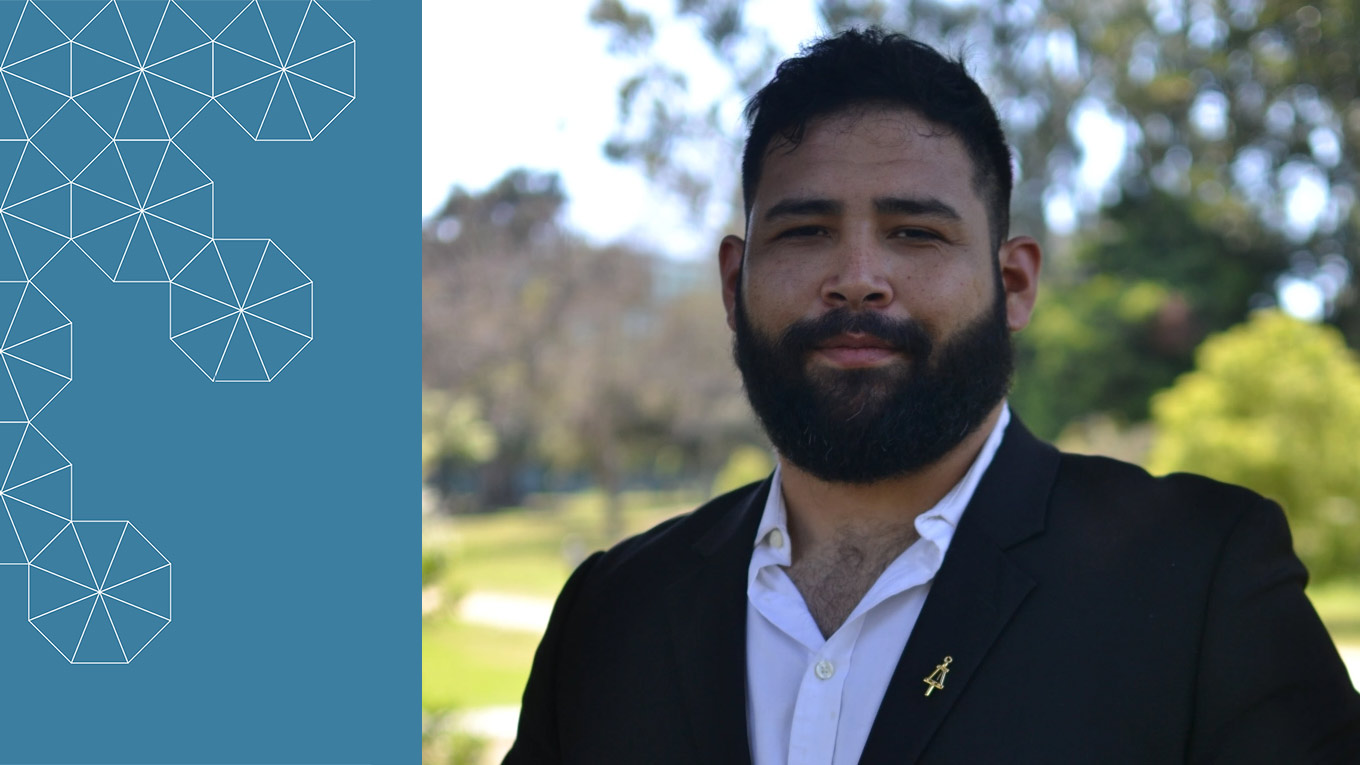 For Ph.D. candidate and Chancellor’s Fellowship recipient Alexander Alvara, the path to UC Berkeley’s College of Engineering has been a long and winding road.

As a teenager, he would help his six younger siblings get ready for school each morning, while his mother, a single parent, juggled two jobs. He never minded the extra responsibility, but the lack of stability and scarcity of resources made his path to higher education a challenging one.

“It was tough because we kept getting evicted,” said Alvara. “So we bounced around at a lot of schools.” After enrolling in his fourth high school, he dropped out to work full time.

It would be many years and minimum wage jobs later before Alvara could finish high school and enroll in community college. At Pierce College in Los Angeles, he started as a psychology major but soon discovered his passion for science and took the first of many steps that would lead him to Berkeley.

UC Irvine was Alvara’s next stop, and the place where he pushed the bounds of his academic potential. He graduated in 2017 with three bachelor’s degrees, having triple majored in materials science, mechanical engineering and aerospace engineering.

Alvara credits his upbringing and an innate curiosity about the world with helping him navigate the heavy course load and rigorous subject matter.

“Mostly, it was curiosity, interest and an actual desire to learn. Even now, I take courses that have no bearing on my Ph.D.,” he said. “As for how I handled the load, I think it really comes down to how I grew up, being able to manage a lot of things and deal with failure on a regular basis. I had a lot of training.”

Alvara then applied to mechanical engineering Ph.D. programs but soon learned he had been awarded a Fulbright Scholarship. He spent the next year in Canada working in pediatric surgical robotics with the Hospital for Sick Children and the University of Toronto.

After returning to the U.S., Alvara reapplied and was admitted to many of the same Ph.D. programs that he had applied to previously. Ultimately, he chose Berkeley because it provided the collaborative environment he was seeking as well as financial support.

“One of the main reasons I chose UC Berkeley was because they offered me the Chancellor’s Fellowship,” said Alvara. “Coming from a background of scarcity and poverty, it’s always a huge benefit to know up front that you’re going to have money. This allowed me to work and focus, and not be distracted by [finances].”

The Chancellor’s Fellowship is part of UC Berkeley’s commitment to recruiting doctoral students of outstanding achievement and potential, including those who will enhance the diversity of the graduate student population. It can provide up to $34,000 per year for five years and be in the form of fellowships, research and teaching assistantships. Other benefits include covered in-state tuition costs and healthcare.

According to Alvara, the fellowship has helped assuage some of his daily worries, particularly around food scarcity and housing insecurity. It also has given him some added security during unusually challenging times, such as between 2019–20, when his uncle and then his cousin passed away, followed by his aunt, who was like a mother to him. Alvara was about a year into his Ph.D. program when he experienced this series of painful losses.

“That had a huge impact on our families. I really feel like had that [money from the fellowship] not been available, I would have had to stop [my studies],” he said.

Alvara has persevered, despite these difficult life circumstances, and has been awarded numerous fellowships over the years, including the NSF Graduate Research Fellowship Program, the Ford Foundation Predoctoral Fellowship, the GEM Ph.D. Fellowship and the Hearts 2 Humanity Eternal Fellowship, founded by William Wing Yen Chu (Ph.D.’78 EECS). He also was the recipient of the Robert P. Lin Graduate Fellowship and the Diversity and Community Fellowship, both granted through UC Berkeley.

In addition to financial support, Alvara has found a community of peers at Berkeley, who have provided helpful life advice and been a critical source of social and emotional support.

“I came from a background where no one I knew had ever gotten a Ph.D., so I had no one to ask about any of this,” said Alvara. “Senior students and student groups — such as LAGSES [Latino/a Association of Graduate Students in Engineering and Science] and SACNAS [Society for the Advancement of Hispanics/Chicanxs and Native Americans in Science] — have been a huge help in a lot of ways.”

Nearly five years into his program, Alvara believes that his experiences at Berkeley have shaped him as an engineer while opening his eyes to new interests.

Even as he works on his Ph.D., he has his sights set on new frontiers. “Quantum materials and BioMEMS [biomedical microelectromechanical systems] were a big surprise to me,” said Alvara. “Now that I’ve had a chance to look at what’s involved on a deeper level and get a feel for what the future is going to hold in that field, it really makes me understand that it is really cool.”

Alvara expects to complete his Ph.D. in mechanical engineering in another year or two. Currently, he is focused on numerous MEMS projects, including walking silicon microrobots, small-scale spacecraft, 3D-printed microrobots and ultrasonic sensors for unbiased heart monitoring.

He hopes that more students can receive the same support that he did through his fellowships and encourages them to pursue these opportunities. “You gain nothing but experience every time you apply, and sometimes you gain more than that,” he said.

And, finally, when life seems to keep throwing roadblocks in your path, Alvara has one piece of advice: “As much as it may be painful or difficult, if you’re already in it, just keep moving forward.”