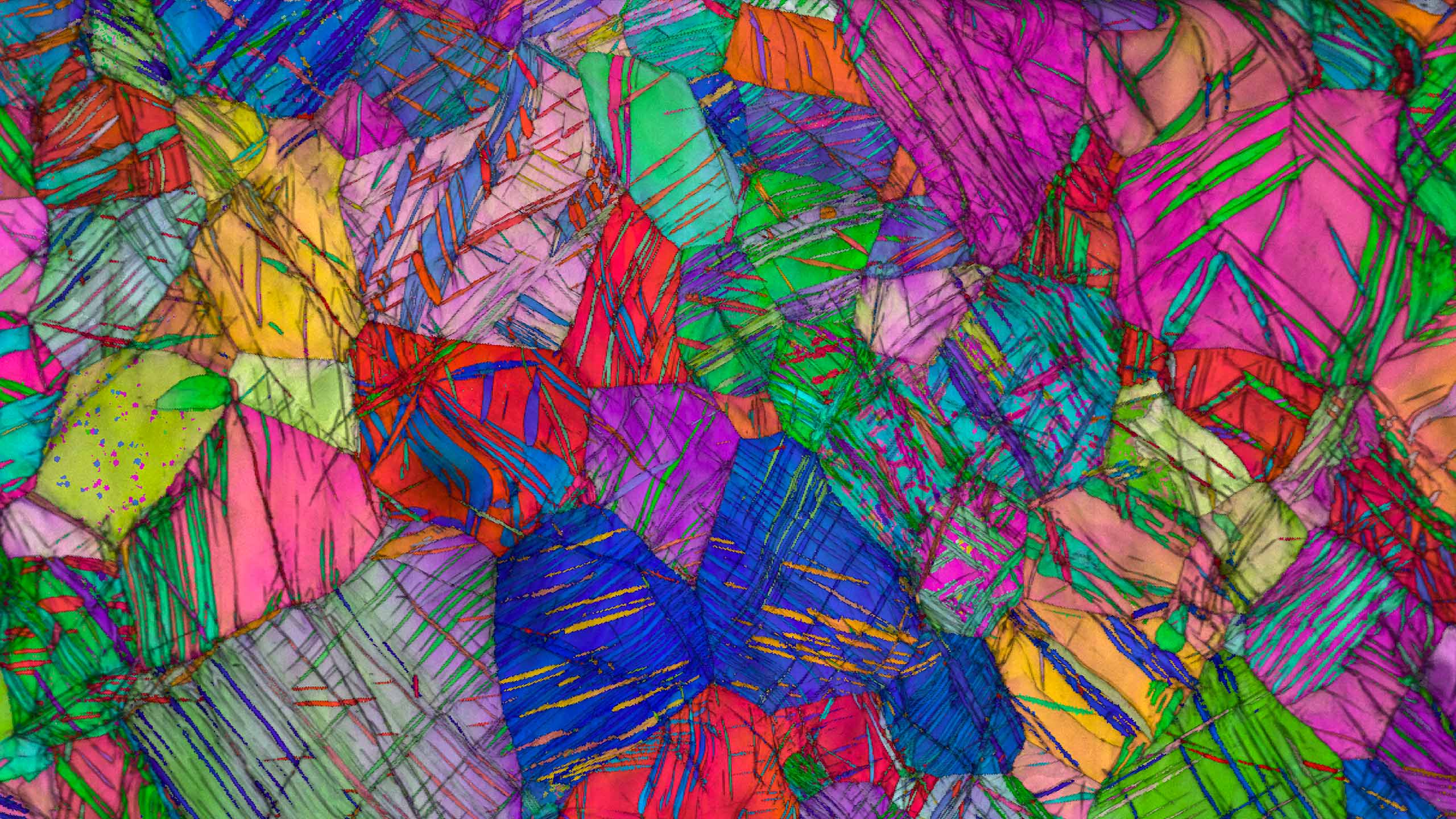 A new time for titanium

May 8, 2022 by William Schulz
This article appeared in Berkeley Engineer magazine, Spring 2022

Among metals, titanium’s strength and lightness, corrosion resistance and ability to withstand extreme temperatures have long distinguished its value, particularly for weight- and environment-sensitive applications. When it was first described in the late 18th century, a co-discoverer named the metal for the Titans — gods born of Earth and sky in ancient Greek mythology.

Time has only burnished titanium’s luster. “I’m a materials scientist, and so people sometimes ask me, ‘what’s your favorite element?’” says Andrew Minor, professor of materials science and engineering. For buildings, airplanes, missiles, spaceships and more, he says, “if you want the strongest material for the least amount of weight, it’s titanium. If we could, we would make everything out of titanium.”

Indeed, for industrial designers, the prospect of strong, lightweight, highly fuel-efficient cars, trucks and airplanes, for example, or super corrosion-resistant cargo ships, titanium must be the stuff of dreams.

The problem? “It’s too expensive,” Minor says of industrial-grade titanium or titanium alloys that might otherwise replace steel when only the strongest, most durable materials will suffice. In fact, the cost of making titanium is about six times greater than that of stainless steel. As a result, its uses have remained limited to specialty parts for aerospace, high-end items like jewelry or other niche applications.

What’s more, pure titanium has only moderate strength, Minor explains. It can be strengthened with elements like oxygen, aluminum, molybdenum, vanadium and zirconium; however, that is often at the expense of ductility — a metal’s ability to be drawn or deformed without fracturing.

Now, after a decade of research, a new era for titanium, including greatly expanded engineering applications, may be approaching, thanks to Minor and his Berkeley colleagues, including Mark Asta, Daryl Chrzan and J.W. Morris Jr., also professors in the Department of Materials Science and Engineering. They’ve been probing and prodding titanium in any number of ways in hopes of expanding its practical use for a variety of structural or engineering applications.

In a series of studies, the researchers have developed critical new insights about titanium, including recipes for making better titanium alloys as well as a cryo-forged technique for making industrial-grade titanium — advances that could ultimately lead to more cost-efficient and sustainable manufacturing.

A schematic drawing of the cryo-mechanical process that results in nanotwinned titanium.
(Illustration by Andrew Minor)

It’s important to understand that the cost of titanium is not due to its rarity. Titanium is not a precious metal; rather, it is found almost everywhere around the world, in igneous rocks near the surface. It’s Earth’s ninth most abundant element and fourth most abundant metal, and it can be used to make things both in its pure form or as an alloy.

Instead, what drives the excessive cost of commercial-grade titanium, Minor explains, is the complex Kroll process most often used to make titanium bars, ingots and other forms of the metal that can be fabricated into useable parts and other products. The process includes the use of expensive materials like argon gas, and it is energy intensive, requiring multiple melts at extremely high temperatures, especially to control oxygen impurities.

Indeed, titanium and oxygen have a puzzling relationship, one that Minor, Asta, Chrzan, Morris and colleagues have wanted to understand better. The team knew that an oxygen impurity is often used for titanium alloys to harness a potent strengthening effect. Titanium made with just a tiny increase in the amount of atomic oxygen can result in a metal with a several-fold increase in strength.

Unfortunately, the oxygen can also yield an even larger decrease in the metal’s ductility. It becomes brittle and will fracture and break.

But “oxygen is everywhere,” Minor says of the difficulty in maneuvering around titanium’s high responsiveness to oxygen. “It’s not some impurity coming from the source material that you can just avoid.”

He characterizes titanium’s sensitivity to oxygen as extreme. “It’s truly strange how powerful it is,” Minor says. It exerts effects on the metal, both good and bad, whereas the presence of similar amounts of oxygen are insignificant for metals like aluminum and steel because it can be dealt with in processing much more easily.

To learn more, the team turned to high-performance computing to model the deformation process in titanium under stress and with differing amounts of oxygen. Computer models, Asta says, are a “powerful set of tools that let us investigate this outstanding challenge in titanium metallurgy.”

Of the team’s major discoveries, a shuffling of oxygen atoms in titanium’s crystal structure when the metal is under stress, became key to understanding the loss of ductility. In a non-stressed state, oxygen molecules reside without incident in natural gaps between atoms of titanium. But under mechanical forces, the oxygen atoms can shuffle to adjacent spaces where they provide less resistance to dislocations that, if they spread, weaken the metal.

“The oxygen promotes a structural weakness,” says Minor. As mechanical forces deform the metal, the displaced oxygen atoms, rather than blocking the spread of structural defects, can facilitate a so-called planar slip.

A planar slip, Asta says, is like a ripple of defects in the metal’s crystal structure that build one on the other, eventually leading to fractures, cracks and a brittle piece of metal.

To understand how a dislocation can form and spread in titanium, Chrzan suggests visualizing trying to move a large, heavy rug.

“A very large rug can be picked up at one end and dragged across the floor to a new position,” he says. But another way to move the rug is to create a ripple at one end and then, by shuffling your feet across the top of the carpet, you can “walk” the ripple to the other end. Provided nothing blocks its movement, the entire rug will have been displaced by a distance equal to the width of the ripple.

Such “ripples” in titanium can be seen with electron microscopy. “You can see all the dislocations are lined up, in rows,” Minor says. “And that’s bad for ductility because if they line up and only follow each other, they don’t get tangled up [and thus stopped] such that the metal doesn’t work harden. You get a stress concentration, and that’s where you get a crack.”

Design strategies that interrupt the oxygen-atom shuffling process or promote nanostructures to stop planar slips from piling up could lead to better alloys. These alloys would have applications especially in the automotive and aerospace industries, Minor says. To address these and other issues, the team relies on a mix of computer modeling, transmission electron microscopy (TEM) and other imaging modalities, and experiments.

“One of the things that’s been really nice about this project is that sometimes the computationalists and theorists are out a little bit ahead, and other times it’s the experimentalists,” Asta says. “We meet frequently and talk about our findings and our new ideas.”

The team’s study of titanium’s oxygen sensitivity, for example, led to a study of titanium alloyed with aluminum and oxygen. They found that oxygen embrittlement could be eliminated by adding small amounts of aluminum, especially at cryogenic temperatures, which are below -150 degrees Celsius.

With just the right amounts of aluminum and oxygen, the team says, a new ordering of the titanium crystal structure prevented a shuffling of oxygen atoms that would lead to a damaging pileup of dislocations and ultimately fractures. What’s more, because the introduction of aluminum reduced the oxygen sensitivity of titanium overall, processing costs to create a useable metal would also be reduced.

In yet another study, the team looked at research going back to the 1960s showing that many metals and alloys display dramatic increases in ductility when subjected to periodic electrical pulses during deformation of the metal. But the underlying mechanisms on why this so-called electroplasticity might be true are not clear.

“Electroplasticity can lead to reduced costs for metallurgical processing, since it takes less energy to form metal with electrical pulses than heating the entire metal up to a high temperature to achieve the same formability,” Minor says. “Interestingly, this effect of electroplasticity is universal in that it has been shown to work for essentially every metal, not just titanium.”

The team performed tensile tests of the metal under three different conditions: room temperature with no electric current, with a periodic electrical pulse of 100 milliseconds duration and with constant current. Because applying electric current heats the metal, the team was worried about distinguishing the effects caused solely by electricity from those caused by heat.

Their results showed that, despite using a smaller periodic pulse than previous studies, the pulsed-current method improved tensile elongation of the titanium alloy as well as its maximum strength. They note that this effect was specific only to the pulsed-current experiment.

With the aid of TEM to see changes in the metal’s crystal structure, their results suggest that the pulsed-current treatment suppresses planar slip dislocations. The researchers found that the electrical pulse hardens the material and frustrates development of planar slip by maintaining a diffuse, 3D dislocation pattern that ultimately delivers high strength and ductility.

Most recently, Minor and Robert Ritchie, professor of materials science and of mechanical engineering, developed a pioneering bulk processing method to make pure titanium that is less expensive and yields a metal with greater tensile strength and ductility. Aside from alloys, another way to strengthen structural metals is to tailor the size of crystals — also known as grain — that make up the metal by using heat and mechanical processing, such as rolling or pressing. By reducing the grain size to sub-micrometers or nanometers, researchers can introduce so-called nanotwinned structures, or defects in the metal caused by aligned crystal structures. The nanotwinned structures improve strength and lower the risk of fracture by acting as a barrier to planar slips. By tailoring the spacing and orientation of the nanotwinned structures, Minor says, the mechanical properties can be optimized even further. But traditional methods of doing so are neither trivial nor cheap.

Instead, Minor, Ritchie and colleagues introduced multiple nanotwinned structures in pure titanium by means of a cryo-mechanical process. They used cube-shaped pieces of titanium that were pressed along three sides in liquid nitrogen. The gentle compression, Minor says, controls the density of nanotwinned structures that strengthen the metal while preserving its initial grain structure. Best of all, the process does not rely on intense heat and may be a more sustainable way to make titanium for a much wider range of applications than today.

The mechanical properties of the cryo-forged material, specifically strength and ductility, hold at extremely high as well as cryogenic temperatures. Minor says the performance of the nanotwinned titanium makes it ideal for things like extremely hot jet engines as well as very cold operating environments that would suggest uses like retaining rings for superconducting magnets, structural parts of liquefied natural gas tanks, as well as materials to be exposed to deep ocean or deep space environments.

Asked if the new commercial-grade titanium fabrication process might be brought to scale one day soon, Minor says, why not? It’s actually harder to do things like the Kroll process that’s used today, where the material has to be isolated electrically and the entire process takes massive amounts of power. “And this cryo-forging, you know, we would just be putting things in a bath.”