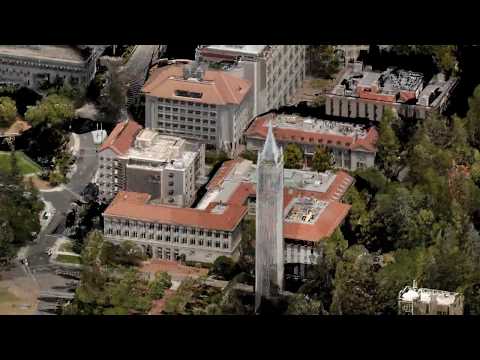 Good news, California. The Hume Lake Dam, which holds back Tenmile Creek, located in the Sierra Nevada 50 miles east of Fresno, is in remarkable shape. But it took a trip to the top of the Campanile to confirm that.

The Hume Lake Dam, built in 1908 just outside the west entrance to Kings Canyon National Park, is one of 1,400 aging dams in California. With the recent troubles at the overrun spillway at the much larger (and more recently constructed) Oroville Dam, which controls the Feather River in the eastern Sacramento Valley, interest in the state’s aging infrastructure — and dams in particular — is at an all-time high.

The Hume Lake Dam — the world’s first multiple-arch reinforced concrete dam, designed as a cheaper alternative to the conventional rock-fill dam — was built by the Hume-Bennett Lumber Company to float timber before processing at a nearby mill.

During the summer of 2016, the health of the Hume Lake Dam became the focal point for civil and environmental engineering (CEE) undergraduate students Tamika Bassman and Katherine Cheng. Looking for hands-on engineering experience, they joined a research project led by CEE professor Robert Kayen. At the time, Kayen was working with the U.S. Forest Service, the manager of the Hume Lake Dam, which sits in the Sequoia National Forest. His task was to create a model of the structure by producing high-resolution 3-D scans of the dam while it was full, and again when it was empty.

“We used a terrestrial laser system called lidar (light detection and ranging) to scan the surface of the dam,” said Kayen. “The first thing we learned was that the dam is in very good shape. It was much stiffer in the response to water pressure against the face of the dam than expected.”

“The other thing we learned,” he continued, “which was a big surprise, was that when the dam reservoir was full we expected the pressure to push the dam downstream, to cause a rotation downstream. In fact, what happened was that the dam tilted slightly upstream, between one and four millimeters, which led us to go hunt for the error.”

Bassman and Cheng got involved to investigate the unexpected result, which meant that the researchers first had to make sure that their measuring tools were properly calibrated.

Archeologists, miners and other professions trying to get a sense of landscape are known to deploy terrestrial 3-D scanning. Kayen, who also works with the U.S. Geological Survey, makes use of lidar technology to create digital catalogs of earthquake damage that provide high-resolution data for all sorts of post-disaster studies.

“I started using terrestrial laser scanning to study earthquake deformation of structures and geotechnical problems,” Kayen said. “It’s such a broad and multi-purpose tool that we’ve gotten involved with other things, like looking at the integrity of an old dam.”

Back at Berkeley, the team used the university landscape to figure out the best and most accurate way to manage all of the data they collected at the Hume Lake site. “Parts of the campus are heavily forested, just like the dam site,” Cheng said. “That vegetation casts shadows, obscuring data. So we found an optimal way to deal with that.”

By testing different measuring techniques on campus, they were able to be confident in the millimeter precision needed to draw conclusions from the dam data.

More specifically, the campus model proved the utility of a system of registration points the team developed to be able to replicate measurements (on different visits) when Hume Lake was empty and the when it was full. The team devised a registration system using white circular reflectors, like the kind used on traffic signs. “We tested just picking points to take measurements, or measuring from reflector to reflector,” Cheng said. “We found that reflectors had a lower error.”

“We had laser points painting the entire landscape, and we could have made measurements off of all sorts of objects in the field, but we didn’t,” Kayen said.

“The whole approach changed when we realized that we could get the best measurements from reflector-to-reflector distances between the control and the actual dam,” he said. “We learned that here on campus, not up there.”

“By having a local experiment you can do things quickly, and when they don’t work, you can try and figure out a better way to deal with the problem,” Kayen added.

To get the scans they needed, Bassman and Cheng loaded a cart with roughly 100 pounds of laser equipment and made their way to the top of campus buildings (including from the Campanile) to capture all of the university’s various views and angles. In all, they made 25 individual scans of campus, collecting millions of data points that they stitched with software into a 3-D model.

“For me this has been a stepping stone into more research,” Bassman said. Both she and Cheng are third-year undergraduates. “We definitely got experience working in the field, collecting real data, and troubleshooting things on the spot. That kind of practical skillset is valuable to me.”