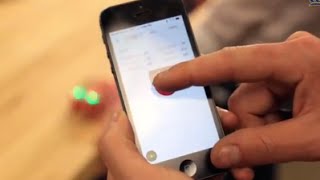 As the semester closes, electrical engineering professor Michel Maharbiz and graduate student researcher Tom Zajdel are watching the final robot project videos from EE40LX: Electronic Interfaces, a course they developed together. The robots in the videos reflect a utilitarian, and at times whimsical, display of creativity. Some students took the robot framework and circuit design outlined in the course materials and customized it to fit their unique vision of what a robot should be. Others hacked together what they could, using the motors from a cassette player for instance, or wine bottle corks and Nutella jar lids for wheels. One student modified a remote control car, while another converted a stuffed animal. A student from Germany customized his robot to sing happy birthday to his three-year-old son.

What makes the course unique is that it is a MOOC — a massively open online course — offered for free from the interactive education nonprofit, edX. The only prerequisite is access to an Internet connection and a willingness to learn.

Lessons are delivered via video from the instructors’ workbench or in front of a whiteboard, in a conversational teaching style. The comfortable instructional banter and the close up view come as a surprise. After all, students watch from around the world, with wide ranges of technical expertise. Not to mention the class is huge: if all of the 25,000 enrolled students gathered at the same time, they would fill Haas Pavilion — twice.

Despite the size, Zajdel says, “We wanted to create a course where we felt like we were just talking to people that wanted to hack stuff together.”

The course is organized around eight modules of material, beginning with an introduction to circuit design (and the Texas Instruments LaunchPad microcontroller that forms the brains of the robot — the company supported the class and was curious about how the students would use its new product) and ending with presentations and descriptions of final projects. In between, the course breaks down individual parts of the build process and goes over them in detail.

Maharbiz says the idea to teach this MOOC came after he taught the campus-based EE40, which is a more traditional circuits, theory-dense, course. At the same time he was building a simple robot at home with his kids. Then he started thinking about the middle ground between the two extremes. “I realized that people would appreciate an introduction to this material, but not at the depth of the traditional circuits course,” Maharbiz says. “There is a thirst to have an introduction to basic analog electronics, in part because there’s a boom in robotics and many people in robotics come from a programming background and want to understand the electronics side.”

“Traditionally, first classes in electrical engineering are circuit analysis, which contain a lot of mathematical equations. A lot of that is unnecessary overhead when you are just trying to make things work. The MOOC is different from what happens on the Berkeley campus because the classes serve different purposes. Berkeley courses are for students to learn about theory and abstractions, so they can go on and study more complex engineering systems,” Zajdel says.

The MOOC’s students come from a variety of backgrounds, including a retired oceanographer from Oregon who wants to keep up with her grandsons, technology-wise; a high school teacher from Buffalo who wants to get some experience before starting a robotics course; and a student from New Jersey trying to fulfill a bucket list item.

This map shows how student enrollment breaks down worldwide. The color gradient represents approximate participation numbers, with deep blue representing 5,000 enrollments or more. (Image courtesy of edX)“Some people said they were always interested in electronics, but they never had the time to learn about it. Other people are coming back to learn more modern stuff,” says Zajdel. About a fifth of the students are from the United States, another fifth is from India and the remainder comes from all over the world. The course, like most edX courses, is taught in English (at least for now).

Some students are even using the class as a reason to spend time with family and friends. “A lot of people on the class forum are doing this class with nieces, nephews or grandkids. One of the Berkeley Lab shuttle drivers is taking this course with his daughter,” says Zajdel. “He has always been into electronics but wanted to learn more. I talk to him about it when I take the shuttle. He gives me updates on how he thinks it is going.”

When not teaching, both instructors are investigating applications for biosensors that, as Zajdel puts it, “use biology and electronics in a complementary way.” Maharbiz is building micro- and nano- devices that interface with biological organisms or processes. His work with smart bandages and cyborg beetles, among other projects, are darlings of the popular science and technology press. Maharbiz also advises a group of graduate students, including Zajdel, who is pursuing his Ph.D. while researching ways to connect sensors to microbes. If, for example, bacteria, which are good at sensing and reacting to complex compounds, can be equipped with sensors, then they can communicate with computers, opening up a literal kingdom of possibility.

The opportunity to have access to cutting-edge experts is not lost on the MOOC students. Toward the end of the semester, one student posted on a course discussion boards: “I read something like this: Backpack Turns a Beetle Into a Remote-Controlled Cyborg and realize…. This course must have been pretty damn boring for professor Maharbiz to teach… (You too Tom). Thank you so very much to the entire staff team for the time and effort to put together this excellent experience.”

A massively open online course can also benefit the university community. “The course allows us to be more visible to the public and it allows us to connect with people. It also lets people see the value and the role of the university,” Maharbiz says. 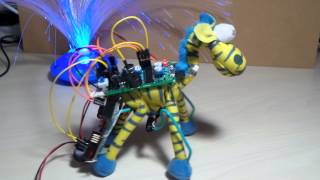 By the end of the semester, 1,090 students finished enough of the coursework to earn a certificate of completion. There were also 528 robot project submissions, documented in either video or with photos, and graded using a peer evaluation system. Zajdel says he learned a lot along the way — the scarcity of robot parts in certain regions, for example. Students could opt to buy a pre-stocked kit in instances where microcontrollers or prototyping breadboards were hard to come by, but even still, “We ran into problems with everyone being able to find popsicle sticks,” Zajdel says. “The springs that make the feet were actually the hardest to find. Some people figured out that the springs out of a D-battery case worked.”

Maharbiz says one student in India figured out that he could obtain parts need in the class cheaper than a regional supplier, and even started a little side business of sourcing the materials for his nearby classmates.

Despite some of the challenges, Zajdel says he’s satisfied with the way the course went. He’s already looking ahead. “It would be cool to run it again,” Zajdel says. “There is already a demand.”