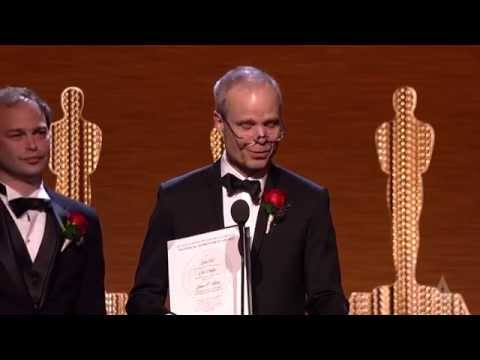 Berkeley engineers frequently win awards for innovations and impressive achievements in scientific fields— but it’s not every day they win an Oscar. Last weekend, EECS professor James O’Brien was awarded a technical achievement award (sci-tech Oscar) by the Academy of Motion Picture Arts and Sciences for his “influential research on the finite element methods that served as the foundation for [the development of the Digital Molecular Matter toolkit].”

Finite Element Destruction Modeling – the method O’Brien helped develop — is a simulation method for generating the motion of objects or structures as they are damaged or destroyed. Originally developed as a research prototype at Georgia Tech, then Berkeley, it is now available as a commercial product from Pixelux Entertainment called Digital Molecular Matter. This work has been used in more than 60 feature films over the last five years, including Harry Potter, Godzilla, Life of Pi, World War Z and Guardians of the Galaxy.

O’Brien received his B.S. in 1992 from Florida International University. He earned graduate degrees at Georgia Tech, where he received his Ph.D. in 2000. That same year, he joined Berkeley’s computer science department, where he runs the Berkeley Computer Animation Modeling Group.
Related:
“Moonshadow,” Berkeley Engineer, spring 2014