Three engineers work by day at one of the nation’s premier research labs; by night, they color-code transcriptions of pop songs. It could be the setup to a new prime-time sitcom. Or, perhaps, the wacky backstory of another successful startup.

Chris Anderson, Ryan Miyakawa and Dave Carlton are hoping the latter fate awaits their ascendant side-project Hooktheory, though if television does come calling, some fudging of facts may be in order: Carlton has now left Berkeley Lab, where his partners work as research scientists with the Center for X-Ray Optics, for an engineering job at Intel. 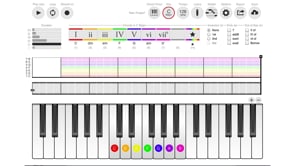 Ryan's Tabs #1: Analysis of Ashes and Wine by A Fine Frenzy

When the workday ends, nights with Pink, Carrie Underwood, Bob Dylan and Jon Bon Jovi begin. In fact, in over two years’ worth of spare time, the three engineers and longtime friends have analyzed the chords and melodies to more than 1,300 sections of popular songs from countless genres and eras. Then, they sifted through the data for patterns and trends, hoping to develop tools allowing aspiring songwriters to follow suit.

On June 6, 2012, Carlton posted the results of their pop-canon analysis to Reddit and other web aggregators. The response was swift and nearly overwhelming. Hooktheory’s server started crashing. Its Facebook page registered thousands of “likes” in a matter of minutes. Even now, two years later, Google directs a couple thousand people per day to the article.

The trio first met at the College of Engineering in 2005. They became good friends and decided they wanted to work together on something, but they didn’t know what.

Beyond engineering, the other thing they had in common was music. Miyakawa has been playing piano since he was two or three, and is classically trained. He has perfect pitch and an encyclopedic knowledge of music. Anderson is a self-taught guitarist — a “Guitar Center musician,” he demurs — and a talented one at that. Carlton falls somewhere in the middle: he took piano lessons as a child, and later played trumpet and took music theory classes in college.

“It was always a big mystery to me how people write songs,” says Carlton. “Finally, getting into college and taking those classes, I realized there’s a science behind it.”

In 2009, the trio considered creating a music-education platform that would make it easier to teach that science. To overcome what they considered the primary barriers to most peoples’ engagement in music theory, they wanted to use popular rather than classical music as a framework, and to develop a unique form of music notation devoid of measures and staffs. They envisioned a simple and intuitive platform with colorful bar graphics like those in the Guitar Hero video games.

“I could never read sheet music, and I was always intimidated by conventional music theory books,” Anderson says. “We thought we could bring that information to the public in a way that had never been done before.”

In 2011, the team tested its material before 40 Berkeley students through a DeCal class called The Theory of Popular Music. “By the end of the course, most of the students could write songs and felt confident about what they were doing,” Anderson says.

The three friends knew they were on to something. “We decided, after we taught the class, that we wanted to put this out there,” Carlton says.

The Hooktheory system uses relative notation and “scale degrees,” where chords are represented by Roman numerals relative to their key instead of the fixed letters with which we are mostly familiar. In the key of C, a C chord is I, a Dm chord is ii, an Em is iii, an F is IV, and so on. Hooktheory explains how and why these relationships, and not specific chords, underpin pop songwriting. While relative notation isn’t unique to Hooktheory — it’s a tenet of classical music theory — the program’s linear, color-coded bars are. The color bars allow users to clearly see how songs are composed and to discover patterns among them. Chapter Two, for example, shows how sections of “Let It Be” by the Beatles, “Don’t Stop Believin’” by Journey, “She Will Be Loved,” by Maroon 5 and “Edge of Glory” by Lady Gaga all use the exact same chord progression — I, V, vi, IV; or, in Hooktheory code, red, blue, purple, green — despite being in different keys.

Drawing upon their engineering and coding skills, they developed a suite of products to bring their ideas to a broader audience. An online platform called Theorytab allows users to easily learn about and play back chord progressions and melodies from popular music. A free, web-based software program called Hookpad helps songwriters choose chords and write melodies for their own music. “I don’t think there’s any other program out there that really shows you why a particular melody sounds good with a particular chord progression,” Anderson says.

And an interactive book called Hooktheory I, available for $15 on iPad, Kindle and smartphones, teaches basic music theory through a series of highly visual lessons rooted in popular music. At its core, the book — which takes a few hours to read, and more to fully absorb — breaks down songs to their most basic components to illuminate patterns spanning decades of popular music. Recognizing and, more importantly, understanding these relationships allows musicians to progress from simply enjoying the songs, or perhaps learning to mimic them, to employing (or avoiding) similar patterns in their own music.

A second Hooktheory book addressing more complex concepts in music theory should be out by the end of the year. Yet the entire package works on numerous levels, from the most basic pop to more challenging works. Any rules it seems to embrace can also be broken, despite early worries that the approach would be too cookie-cutter.

“Our approach is great for people who don’t have a lot of exposure to music theory, but at the same time, it can be applied to very complicated songs,” Miyakawa says. “I was always worried that we were oversimplifying the music-theory side. But the music-theory geeks are the people that are really, really into this.”

The Theorytab interface, an open-source wiki similar to Wikipedia, has already attracted hundreds of these self-described music theory geeks to post and edit transcriptions of thousands more songs, from ABBA’s “Dancing Queen” to Warren Zevon’s “Werewolves of London.” The growing database has now been viewed by millions of people and is being integrated into music curricula around the world.

Now the three friends are pushing to get Hooktheory into more schools and music-education programs from middle schools on up to universities. Dave Tromba has been using it for almost two years with 600 seventh and eighth grade students at Dover Middle School in New Hampshire. “I found their book to be a very easy way to communicate some of those concepts,” he said. “With Hooktheory, they’ve been able to get way farther in than they otherwise would.”

Last summer, the three entrepreneurs joined Berkeley’s SkyDeck business accelerator. SkyDeck offers assistance with funding, contacts and other business tools, but to date Anderson, Miyakawa and Carlton have primarily enjoyed the 24-hour access to office space in downtown Berkeley. Two nights a week, they convene there from 7 p.m. to midnight. Other evenings when they can find the time, they go alone.

“They are a great example of bootstrappers who are very capable and know what they want,” says SkyDeck executive director Jeff Burton. “We’re delighted to have them as a part of SkyDeck, and we think their product is a great one.”

Eventually, Hooktheory could become a full-time job for the trio, but this isn’t something they see happening in the immediate future. “We actually really like doing our science and engineering jobs during the day,” says Carlton. So for now, the late nights and split lives aren’t going anywhere, which is just as well — it sure makes for a great story.

Thanks to Hertz Hall for the photo venue; lyrics above from “Free Man in Paris,” by Joni Mitchell.