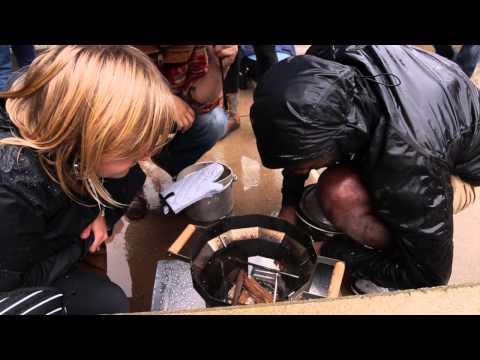 It’s nearing lunchtime on a recent Friday, and under heavy clouds and regular rain, students from Dev Eng C200 huddle around cookstoves in the grand entryway of the Haas School of Business. Once lit, the damp, layered kindling made puffs, and then wisps, of white smoke.

The participants, all graduate students in the development engineering designated emphasis (like a minor for Ph.D. candidates) were trying to get the stoves hot enough to cook a large pot of rice. Some team members were design researchers, responsible for gathering observational data on how the process unfolded. Other team members were data analysts, using thermocouple sensors to collect temperature information during the cooking session.

Development engineers often look for solutions that require both a qualitative and quantitative perspective. New poverty alleviation technologies must be technically sound, but they also need to be economically feasible and culturally appropriate for widespread acceptance.

Cookstoves make a good case study for development technology design and deployment. “Half of the world’s population, three billion people, cook on dirty, smoky and inefficient stoves,” says Ashok Gadgil, professor of environmental engineering and the director of the Environmental Technology Division at Berkeley Lab. Gadgil is widely known for starting the Berkeley-Darfur Stove Project, which produces and distributes stoves for the war-torn region of Sudan.

Dirty cookstoves are lethal. “Smoke from stoves kills about four million people a year. One of the biggest challenges we face as stove designers is improving these stoves to reduce particulate emissions,”  says Vi Rapp, a research scientist at Berkeley Lab.

The Dev Eng class trains students to tackle development technology design challenges, like building a better, cleaner and more efficient cookstove, from a holistic perspective. “The idea,” says Alice Agogino, a mechanical engineering professor and one of the course’s instructors, “is to combine engineering technologies with economic, business and impact analysis.”