Home > News > Work out to charge up 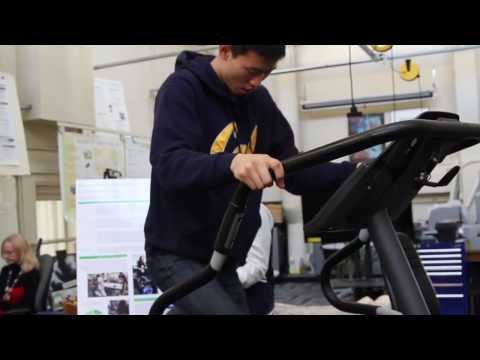 Work out to charge up

In early November, a retrofitted elliptical machine was installed in the university’s Recreational Sports Facility (RSF). The specially outfitted machine is part of a larger project run by engineering students called the Human-powered Gym.

The elliptical machine in the RSF, and another recumbent bike in development, is equipped to convert the energy a user produces while exercising into a cell phone charge. The bike’s charging setup also powers an iPad, which serves as an energy technology education tool that the user can interact with while working out.

Their initial investigations led them to develop a system to capture exercise-generated energy and plug it back into the electrical grid, which would boost the gym’s efficiency and save on energy bills. But faced with challenges relating to scaling and interfacing with the utility company, the focus of the project shifted.

Now, instead of connecting exercise energy to the grid, this latest version of the Human-powered Gym aims to educate users about energy consumption and energy technology by making energy more tangible.

Mechanical engineering professor Alice Agogino is the Human-powered Gym faculty advisor. The team’s work is supported by a grant from the campus-based Green Initiative Fund (TGIF).