In Vietnam, less than five percent of women finish college—often because they can’t afford the relatively small fees. Without skills, many young women have no choice but to take work that pays poverty-level wages, often following in their elders’ footsteps as farmers or laborers.

That was the case for 24-year-old Ngoan Thi Nguyen. Her parents are rice farmers, and her older brother and sister became farmers, too, when the family couldn’t pay their tuition. In Vietnam, as in much of the developing world, no government-backed college loan system exists, and most families can’t afford tuition out of pocket. 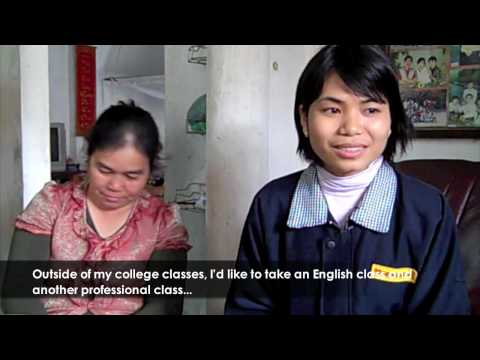 Today, Ngoan is studying chemistry at Hanoi University of Industry, the first in her family to go to college. She plans to get a job in her field when she graduates and can expect to earn three times the average annual Vietnamese per capita income of $1,168. How? She qualified for a $569 loan from a Seattle startup called Vittana, the brainchild of EECS alum Kushal Chakrabarti (B.S.’04 EECS).

Vittana, a south Indian Telugu word for “seed,” models itself loosely on micro-lenders like Kiva and Grameen Bank. At Vittana.org, donors can browse through dozens of student requests and support a student’s education for as little as $25. Students have six months to three years to pay back their loan; once donors are repaid, they can reinvest in another student or withdraw the cash. Vittana sends 100 percent of the money to the student, it says, and pays for its operations through optional donations from lenders.

In 2010, default rates on U.S. student loans reached as high as 40 percent, but more than 99 percent of Vittana students repay their loans. Perhaps, Chakrabarti theorizes, it’s because they know they have a once-in-a-lifetime opportunity. Ngoan, the chemistry student, has already paid back her $569 in full. To date, the nonprofit has funded more than 1,000 students in 11 countries. Next year, Chakrabarti says he wants to fund 10,000 students. His dream is even bigger. “When you think about the need, it’s not a thousand students, it’s a hundred thousand, a million. I don’t know how to eliminate malaria or solve world hunger, but as an engineer, I can build and scale a technology organization.”

At Berkeley, Chakrabarti worked in Lior Pachter’s comparative genomics lab, where he developed skills at the intersection of biology, computer science and mathematics. (Chakrabarti double majored in EECS and molecular and cell biology.) After graduating, Chakrabarti took an engineering job at Amazon.com and eventually was tapped to lead Amazon’s personalized recommendations team. It was high stakes and cutting edge, but he grew restless. He left the company after three years, unsure of what to do next.

“I think he took the Amazon job because of the challenge it offered,” says Pachter, one of Chakrabarti’s mentors. “But ultimately he cared more about social issues, and he went with his heart rather than chase more money.”

The cause that would tug at Chakrabarti’s heart began with a Mumbai rickshaw driver. In fall 2007, Chakrabarti read a New York Times article that interviewed the driver, who said he spent 30 percent of his income educating his children. Chakrabarti found the man’s commitment laudable and thought of all the children who weren’t so lucky. Chakrabarti’s wish—put more young people in school—grew into an obsession, and the idea for Vittana was born.

Chakrabarti knew nothing of micro-lending, finance or higher education in developing nations, but he was schooled in Amazon’s entrepreneurial spirit. For months he phoned experts, worked his Amazon connections, honed a business plan and pitched to potential investors. In May 2009, Vittana funded its first students.

“Education for me was life changing, and I want other kids to have a better chance at life, too,” says Chakrabarti. He credits Berkeley with giving him skills useful at Vittana: How to think through a problem, how to master multiple disciplines, how to seize opportunities. “If you want something, you go out and get it at Berkeley,” he says. ”They were among the most formative and interesting years of my life.”