What’s the best device for dispensing a dollop of hand sanitizer? At Berkeley, it’s one that also prompts the famous Bellagio fountain to erupt, Evel Knievel to crash his motorcycle and a house of cards to spring up before your eyes. 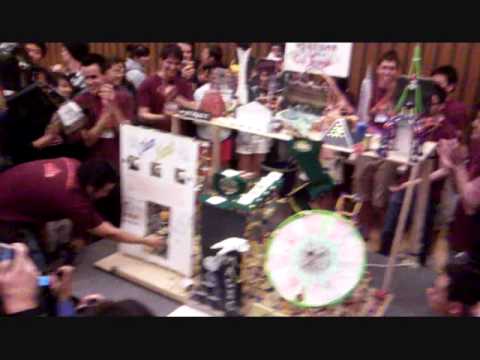 The magic and mayhem were part of a winning, Las Vegas–themed contraption built by a team of engineering students for Berkeley’s first-ever Rube Goldberg Machine Contest in April. (The contest has been held at other campuses for almost 30 years.) The competition challenged Cal student teams to build a six-foot by six-foot machine in the spirit of popular cartoonist Rube Goldberg. Goldberg, a 1904 Berkeley Engineering graduate who died in 1970, is best known for his comic drawings of outrageously complicated machines performing simple tasks.

This year’s Rube Goldberg task, following national competition rules, was to build a machine that would dispense an appropriate amount of hand sanitizer into one’s hand and complete it in a minimum of 20 steps. (A step might be a ball rolling down a ramp.) Judges look not only for successful completion of the task but also creative use of a theme, team chemistry and adherence to the Rube Goldberg spirit, among other criteria. With typical engineering mores turned upside down, efficiency and elegance take a back seat to abundant zaniness and creativity.

“We wanted to break the mold that says all engineers ever do is study,” says event organizer Lana Nguyen, a ChemE senior and member of Cal’s chapter of Theta Tau, a professional engineering fraternity that hosted the competition. “We wanted to provide a space for everyone to learn but also have fun.” Teams had two months to come up with a theme and design and to manufacture and test their machine. Spencer Wong, an ME sophomore, led a team that built a Winter Olympics–themed machine that placed second. Teammates began by delineating steps, then making a rough model in computer-aided design software, and finally going to the Student Machine Shop in Etcheverry Hall, where they assembled their wooden contraption over the course of a week. Wong says the whole process taught him how to make ideas happen.

Yet it was Las Vegas, not the Winter Olympics, that dazzled the audience and judges. Cal Triangle, an engineering fraternity, built the winning, 63-step entry from a variety of materials: wood, the construction toy K’NEX, water balloons, even bars of soap.

“I liked the consistent use of the theme in each step and the variety of materials and effects employed, such as the water fountain and lighting and use of chemistry and magnets,” says Jon Kaplan, one of the competition’s judges and a design engineer at international design consulting firm IDEO. “I also liked the fact that it worked consistently, meaning the team had done, I’m sure, many cycles of build, test and revise.”

Despite the pressures of competition, the Las Vegas machine executed three flawless performances that night, each run completed in less than two minutes. After working on the machine for many weekends and two solid weeks, team members felt joy and relief, says team leader and Engineering Physics junior Dan McClure.

“In classes, I never get to experience the emotion that goes into creating something from scratch. During Rube Goldberg, I felt not only my emotions, but the entire team’s emotions and everything that we had put into building the machine.”

The spirit of Rube Goldberg will return to campus next year for another competition to select Berkeley’s most delightful, madcap, tickle-the-senses machine. Next year’s big challenge? Water a plant.