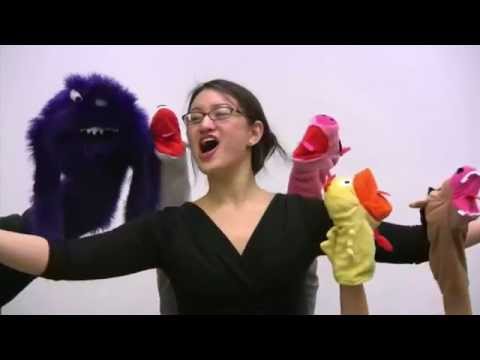 A music video that playfully celebrates all things nano has become a megahit for three Berkeley Engineering graduate students and their Cal team.

Written and composed by 27-year-old Applied Science & Technology student Ryan Miyakawa, The Nano Song swept a recent American Chemical Society (ACS) competition and continues to go viral. It’s captured hundreds of thousands of views and was featured on YouTube’s front page. “I definitely didn’t expect it to be this big,” says Glory Liu, a 20-year-old political economy and classics major who stars in the production, alongside a handful of Muppet-style puppets. “People I have never talked to stop me and say, ‘Hey, you’re the Nano Girl.’”

Miyakawa (B.S.’05 Engineering Physics), a doctoral candidate in x-ray optics and an accomplished musician, was aiming for a catchy and accessible introduction to nanotechnology with his three-minute tune. “We wanted someone who knew nothing about the field to come away with some information,” says Miyakawa, who once teamed with Liu on an unsuccessful American Idol Songwriting Competition entry.

The Nano Song clearly hit the right note. It bested a field of 30 entries to win the People’s Choice and Critics’ Choice awards in the “What is Nano?” contest. Sponsored by ACS Nanotation, the ACS community-based website, the first-time event sought creative videos explaining nanoscience to a broad audience.

Starting with a horse puppet’s query, “Ms. Glory, What is nano technology?” Liu tosses away her textbook and breaks into a lively 4/4 tune:

Nano, nano, nano
what a wonderful surprise
that ordinary is extraordinary
when you make it nano size!

Penelope Lewis, a managing editor with ACS Publications, figured Cal’s “informative and entertaining” entry would be popular. “We were really thrilled, though, that so many researchers, students and educators alike found it relevant and fun,” she adds. The award-winning video was shot in one day in 1 LeConte Hall, a large lecture hall in UC Berkeley’s physics building, with the help of Muppet-inspired puppets made by the participants. (Photo by Nano Song Team.)

In quintessential student fashion, the youthful producers crammed filming into a single marathon session one Sunday in February. “We took a lot of footage for these three minutes,” admits Bennett, 25, a nanotube researcher and veteran filmmaker. He figures he easily spent 30 to 40 hours editing the video. “We had tons of trouble getting Bokor Monster to look at the camera.”

“Bokor Monster” is a grumpy iPod-toting puppet with more than a passing resemblance to Sesame Street’s Cookie Monster. He was named for Jeffrey Bokor, a Berkeley professor of electrical engineering and computer sciences who happens to be Bennett and Carlton’s advisor. Bokor is taking a good-natured approach to his unexpected celebrity

“As soon as I heard about it, I knew that name would have a bad tendency to stick,” he says, with a chuckle. It was Bokor who first heard about the competition and passed the information on to his students, knowing of their interest and skills in video production.

Carlton, 26, liked the idea right away. “I told Ryan, ‘We should write a song! By we, I mean you.’” Carlton, who is pursuing doctoral research in nanomagnetism, plays trumpet and piano and has known Miyakawa since high school. Miyakawa eagerly accepted the challenge, penning the song in just a day. He, in turn, recruited Liu, a classically trained singer he had met in a Physics and Music class, where he and Carlton are graduate student instructors and Liu is a class assistant.

The other team members, all friends, soon fell into place. “It was due in February so we put the whole thing together in like a week and a half,” Miyakawa says.

Operating the puppets and their musical props proved one of the trickiest aspects of production. The puppeteers awkwardly piled on the floor behind the lab desk in 1 LeConte Hall. At one point, Bennett had to hit the “record” button on a borrowed HD handycam and run over to lend a hand.

Although the video is now history, the team has no intention of disbanding. They plan to invest half their winnings in an as-yet-undetermined project. And the rest? That will be spent celebrating at a nice restaurant.